Natural history museums are as much about the past as they are about the future.

It’s difficult to fully appreciate the present or contemplate the future without an understanding of our history. That’s one reason among many I was so grateful for the community’s participation in a day of remembrance and service in honor of our founder, lighthouse keeper and naturalist Laura Hecox.

On Sunday, January 29th, on what would have been Laura’s 163rd birthday, two dozen community members and Museum supporters joined Hecox relatives to celebrate her memory by dedicating a new headstone at her final resting place. Bill and Brigid Simpkins of Santa Cruz generously donated the headstone depicting the lighthouse and crashing surf where Laura spent most of her life. 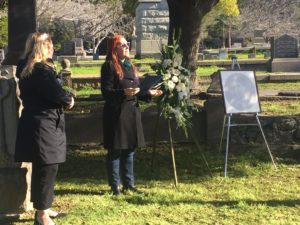 At Santa Cruz Memorial Cemetery, Mayor Cynthia Chase read a proclamation from the City of Santa Cruz designating January 29th as Laura Hecox Day. And I had the opportunity to talk about the love Laura had for the natural world, collecting shells, and other specimens and artifacts that formed the basis of our Museum, which opened in 1905 while she was still our city’s lightkeeper. Laura’s life served as inspiration for the Santa Cruz Naturalist exhibit that opened in June 2016, the first new permanent addition to the Museum’s galleries in over 20 years. 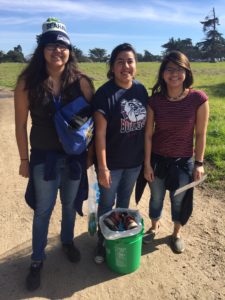 After the graveside ceremony, the Museum led a clean-up project in Lighthouse Field. Laura moved to Lighthouse Field at age 15 when her father assumed the role of the first lightkeeper of the then-new Santa Cruz Lighthouse. She took over her father’s position after his death and continued in that role through most of her life, living in the original lighthouse. Today, in its place, the Mark Abbott Lighthouse now guides vessels around Lighthouse Point. But the field across from West Cliff Drive remains open space full of opportunities to explore. About three dozen volunteers collected over 100 pounds of trash from the field, which was a particularly fitting way to honor Laura and her commitment to stewarding the natural world.

The curiosity and appreciation of nature that defined Laura’s life also informs our desire to be forward-thinking about the future of our environment. Just 10 days before Laura’s birthday, the Museum was delighted to host a sold-out event at the Rio Theatre featuring renowned UCSC geologist Gary Griggs, whose riveting presentation titled “Perils in Paradise” explored Santa Cruz County’s history of and vulnerability to natural disasters. 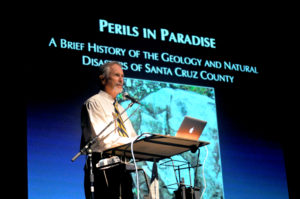 Dr. Griggs captivated the 550-member audience with an engaging overview of geological processes and a historical look at the most impactful natural disasters of our region, one where earthquakes, landslides, floods, fires and other calamities are an ever-present danger. As several storms wreaked havoc across the county on local cliffs, tributaries and roads, Dr. Griggs’ presentation served as a timely reminder that landmark events such as the 1955 and 1982 floods, or the 1989 Loma Prieta earthquake, have long shaped our region and that we cannot control nature. That’s a key reason the Museum exists — to share an understanding of the awesomeness of nature and inspire stewardship of it.

Looking ahead to the spring, we have many opportunities to connect our community to nature in innovative, meaningful ways. In February and March, we will offer several events celebrating the natural history of food. And in April, we will launch our first-ever Spring Camp and welcome back the popular The Art of Nature scientific illustration exhibit. More can be found about our upcoming programming and exhibits on our website.

I hope you will join me at some of these exciting opportunities in the coming months.

As we enter a fresh year, I appreciate this time to reflect on the exciting achievements our Museum has made in 2016. I am also grateful to the many dedicated folks — staff, board members, volunteers and donors — who lent a hand (or two) in our ongoing transformation and evolution as an organization.

January also is a time to look forward to the many initiatives and changes on the horizon. This month, I’m starting a new blog called Contemplate in our monthly newsletter to keep our community up to date on the purposeful work undertaken by our team here to fulfill our mission. 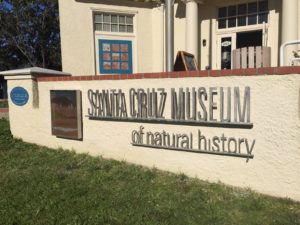 On Dec. 20, we unveiled our new entrance sign, which will be seen by the almost 20,000 visitors we welcome through our doors each year. Thousands more will see it as they make their way to nearby Seabright Beach, the Yacht Harbor or the Beach Boardwalk. The metal sign created by Santa Cruz artist Alan Ziegler features our name and logo but represents much more than just a new face to the Museum. It marks a fresh start for this precious place founded 111 years ago as Santa Cruz’s first public museum.

We are very proud of our long history. Established in 1905, our museum lived in several spaces until it moved to its current home here in this lovely Carnegie Library in the 1950s. In 2009, our organization began the large endeavor of transitioning from City ownership to becoming an independent, community-supported nonprofit museum. This included a name change in 2013 to the Santa Cruz Museum of Natural History. Our new sign showcases that name and reflects the time of revitalization which we are now undertaking.

With the support of our board, donors, neighbors and volunteers, the Museum staff and I have been working hard to make the visitor experience more dynamic and engaging, while ensuring our educational programming and events are reaching new audiences. We continue to strive to connect our community’s members and visitors with our region’s natural and cultural history in personal, meaningful ways.

In the past three years, we have seen a 15 percent increase in general admission — this does not include school groups, member visits, or special events — just the folks who popped in to see what we are all about. And I’m also very excited to tell you the number of new memberships rose 13 percent in 2016 year over 2015.

The experiences we offer at the Museum and through our nature-based programs are expanding, and some of the most recent initiatives include: 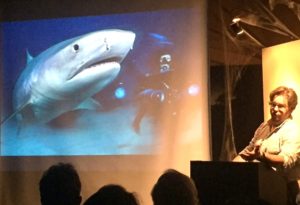 In the coming year, we also will celebrate the birthday of our founder Laura Hecox on Jan. 29 by honoring a new gravestone marking her final resting place. In April, we will feature the 28th installment of our annual exhibit of scientific illustration as well as a new exhibit created by the Santa Cruz Kids in Nature program. We also will premiere a new book about the history of Seabright here in April and are proud to have been a part of this exciting publication created by the Seabright Neighborhood Association.

This is a wonderful time for our Museum. We have so much to celebrate and there is great work yet to be done. We welcome your involvement and feedback in helping us maintain the Museum’s role as irreplaceable part of our community. And if you are not already a member, we would love to have you join us at santacruzmuseum.org.