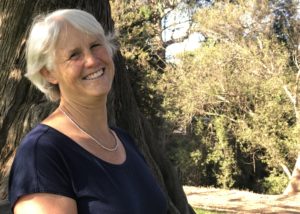 Donna Meyers joined the Museum’s Board of Directors in 2011 and has served as Board President since 2014. She brings a wealth of knowledge about natural resource management to her volunteer role on the Board.

Through her company Conservation Collaborative, Donna has worked as a watershed consultant on numerous projects to restore coastal habitats and regional waterways, including the Salinas and Carmel rivers. Previously, Donna served as the Director of Conservation for the Big Sur Land Trust and as the West Coast Regional Water Quality Coordinator for the National Marine Sanctuary Program.

A Sacramento area native, Donna first visited the Museum as a student at UC Santa Cruz, where she earned a bachelor’s degree in biology before going on to earn a master’s degree in environmental management and planning from California Polytechnic State University, San Luis Obispo. She later joined the Museum as a Member, and for more than 20 years had been enjoying its exhibits and programming when she was approached about joining the Board.

“I just always thought of it as an important community institution,” Donna said, explaining that she has seen the Museum’s relevance increase even more in recent years. “There is more interest in science and natural history in our society these days, and we are starting to fulfill that educational role more prominently. We are just becoming that place where people go to learn about natural history.”

As a woman trained in the sciences, Donna said her dedication to volunteering at the Museum is inspired by its founder, lighthouse keeper and naturalist Laura Hecox, who educated locals and visitors alike about the natural wonders of Santa Cruz more than 110 years ago.

“We are really promoting that legacy of women in science and learning that needs to be maintained and carried forward today,” Donna said. “There is a need to keep people educated in an affordable and accessible way about science and how we manage our resources.”

A 34-year resident of Santa Cruz, Donna also serves as chair of the city’s Parks and Recreation Commission and is an avid hiker and surfer.