Celebrate Native American Heritage Month by connecting with the local Indigenous culture of Aulinta (present-day Santa Cruz) during this month’s Out and About family day. Museum staff will help families create boats, dolls, and other crafts or tools using locally harvested materials traditionally used by the ancestors of the Amah Mutsun Tribal Band.

This event will take place outside the Museum in our Garden Learning Center. This series aims to provide opportunities for families to engage with nature in community with others. All ages welcome.

Out and About is a monthly series of family-friendly, small group get-togethers exploring Santa Cruz’s diverse natural spaces through guided activities. 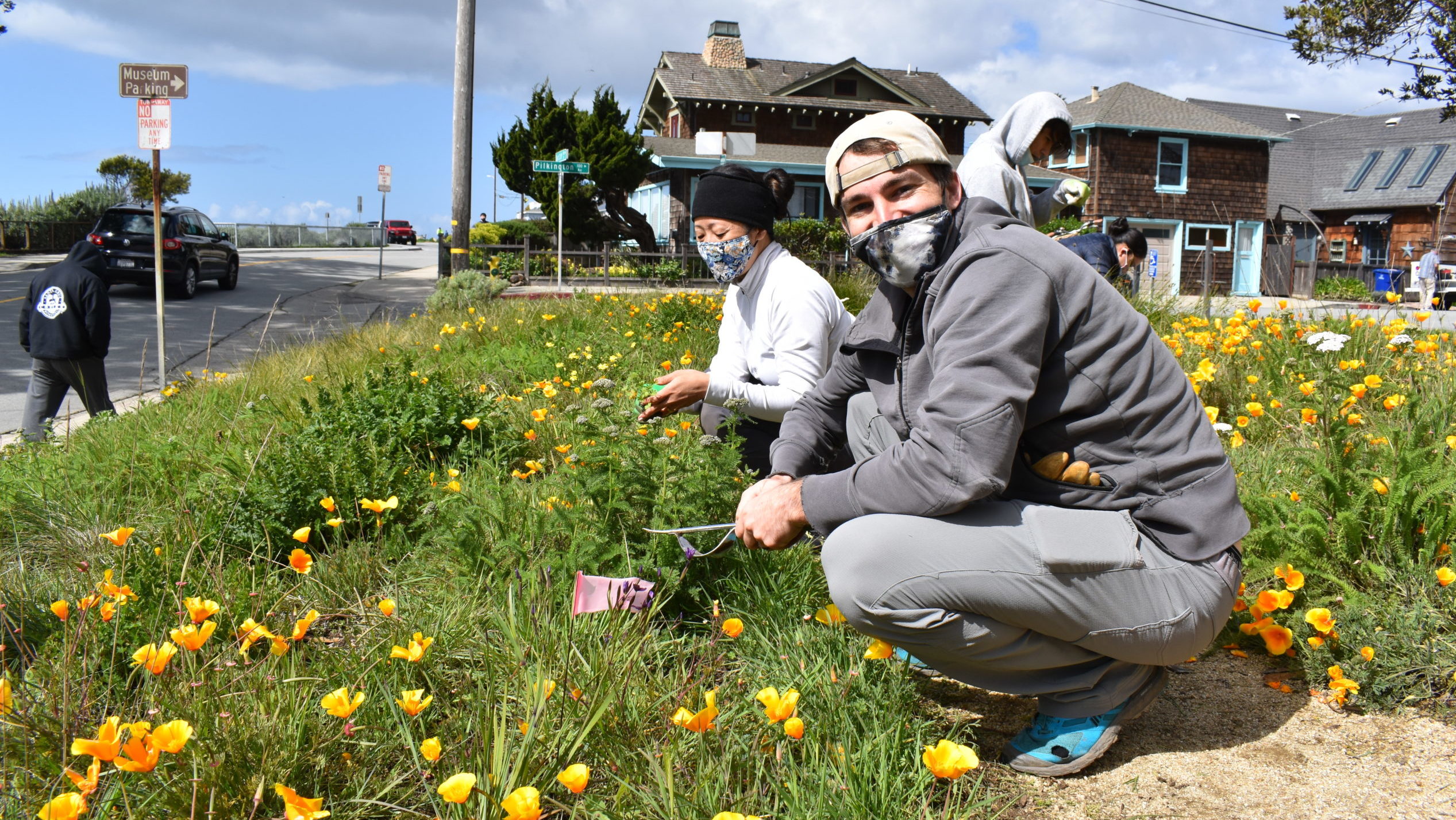 It’s time to get your hands dirty! Learn about local ecology, native plants, and sustainable gardening while coming together as a community to steward Tyrrell Park through the City’s Adopt-A-Park program.

Saturday, November 20 | 10 a.m. to noon
Every third Saturday at the Santa Cruz Museum of Natural History 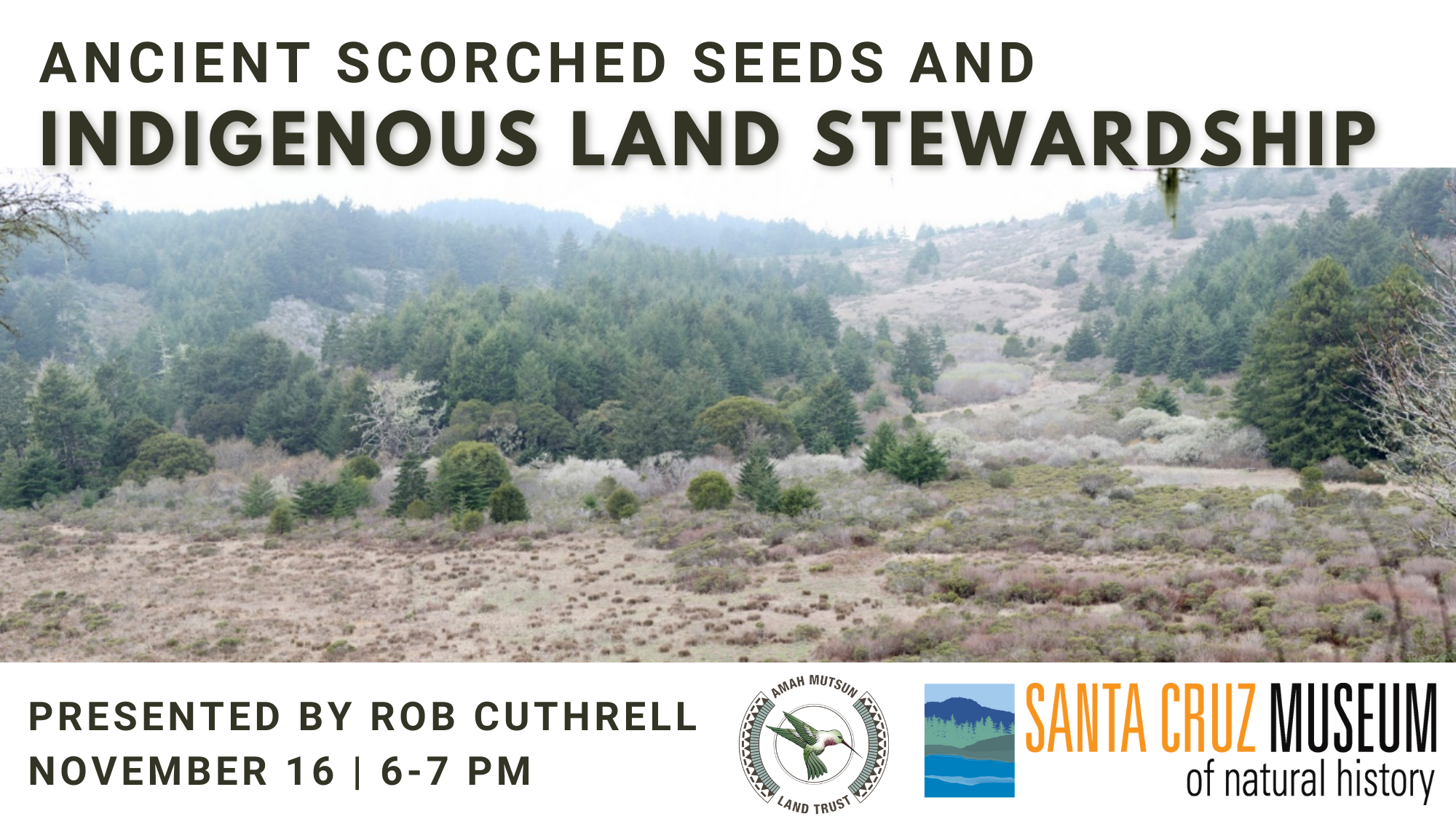 Archaeologists can analyze charred seeds and other plant remains to learn about relationships between people and the natural world deep into the past. This talk will describe how a collaborative research project between Amah Mutsun Tribal Band, State Parks, and academic researchers utilized this type of information to explore how Indigenous peoples on the coast of San Mateo and Santa Cruz Counties used prescribed burning to steward local landscapes. Guided by these findings, Amah Mutsun Land Trust is working to revitalize Indigenous-based stewardship of open spaces today.

Rob Cuthrell is a researcher in archaeology and historical ecology who has studied relationships between Indigenous people and landscapes west of the Santa Cruz Mountains for over a decade. Currently, Rob works as a consultant for Amah Mutsun Land Trust managing a native plant propagation and restoration project on Año Nuevo Point.

This program is in support of the exhibit Seeds: Nature’s Artful Engineering, on view at the Santa Cruz Museum of Natural History through November 28. Coastal prairie habitats have long been tended by Indigenous people along the coast of present day California. During this demonstration outside the Santa Cruz Museum of Natural History, Alex Tabone will share how the Amah Mutsun Tribal Band and their ancestors have used ingenuity to turn the bounty of the Santa Cruz area into delicious meals for millennia.

We will use the traditional process of making food from the seeds of grassland plants, following the whole process from the coastal prairie to the dinner plate. We will all taste our native food creations and participants will have the opportunity to craft and take home a looped cooking stick out of oak shoots.

Alex Tabone is a California State Park Ranger and naturalist who has researched traditional technology from the California central coast and worked with the Amah Mutsun Tribal Band on traditional food revitalization programs.

This program is in support of the exhibit Seeds: Nature’s Artful Engineering, on view at the Santa Cruz Museum of Natural History through November 28. 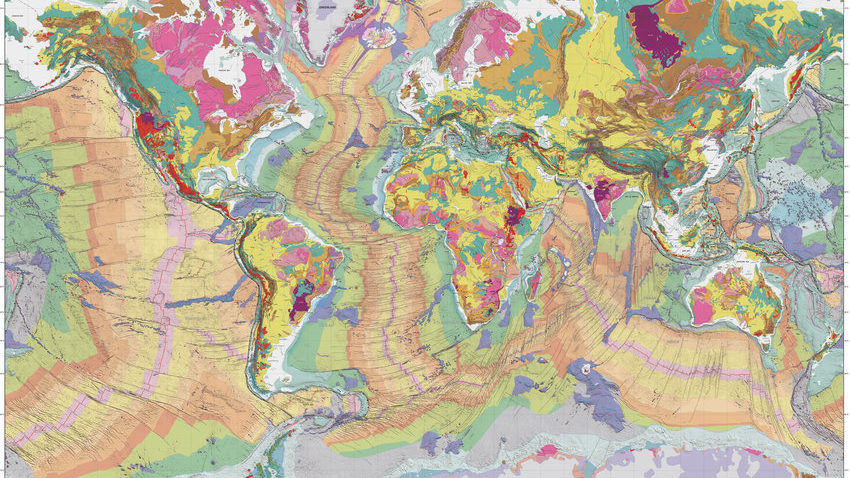 What do rocks have to do with the ocean and the atmosphere? Well, quite a lot it turns out! Join us for our next Rockin’ Pop-Up where the Geology Gents will simplify the complexities of these important earth systems.

About the Series: Join the Geology Gents, Gavin Piccione and Graham Edwards, for monthly conversations about rocks live on Facebook. Each month we’ll explore a different geologic topic, from Santa Cruz formations to tips for being a more effective rockhound.

Submit your questions ahead of time by emailing events@santacruzmuseum.org and feel free to include pictures of rocks you’d like identified! Note: you do not need to have a Facebook account to be able to watch the program live. Come in costume and imbibe cauldron-concocted cocktails while exploring the dark side of nature. The fifth annual Museum of the Macabre will be bigger than ever with freakish festivities and special exhibits throughout the Museum and spreading outdoors into the park. This year’s tricks and treats will explore the mysterious worlds of potions, poisons, and plants, including:

$15 Presale | $20 at the Door
$5 off for Museum Members
Online presale ends October 29 after which all tickets will be sold at the door. Cash or card accepted.

One free drink included with each ticket! Must be 21+ to enter.
Student memberships are $15/year. Become a Member today!

Our thanks to our event sponsors and partners! 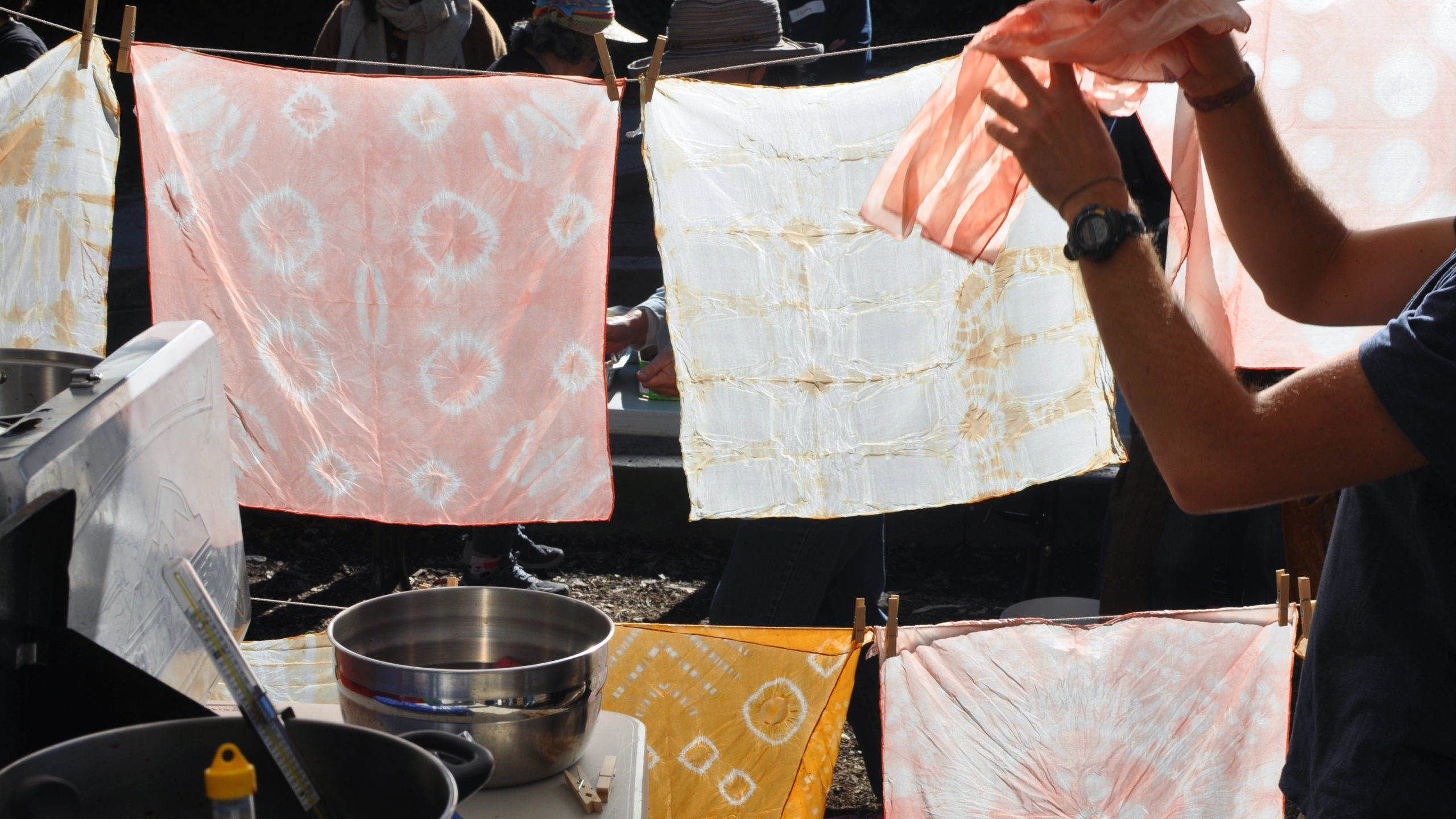 Seeds hold incredible potential — they grow into plants, feed us, and can even produce beautiful colors. During this month’s Member Meet-Up, we will explore the color potential of seeds by processing acorns, avocado seeds, and California black walnuts into natural dyes in honor of our exhibit, Seeds: Nature’s Artful Engineering.

During this hands-on program led by our Public Programs Manager Marisa Gomez, learn how to select and prepare natural dye materials, and properly dye natural fibers. All participants will create their own hand-dyed cotton bandana using the Japanese pattern technique of shibori.

Member Meet-Ups are small group get-togethers for Museum Members where we learn from each other while exploring Santa Cruz’s diverse natural spaces. Not a Member? Join today for as little as $15 a year! Though our coast today is inhabited by sea lions, harbor seals, and elephant seals, none of these species existed in California 3-5 million years ago. Instead, fossils from the Purisima Formation tell a very different story of strange walruses and early fur seals that inhabited our coast. These include the ancestor of the modern northern fur seal (today a rare visitor to Monterey Bay), the bizarre “double tusked” walrus Gomphotaria, and the toothless walrus Valenictus. Several discoveries made by local collectors and paleontologists represent new species — and you’re going to hear new data and findings never reported before during this presentation.

Join us on National Fossil Day for this member-exclusive presentation with longtime friend of the Museum, Dr. Robert Boessenecker.

“I grew up in Foster City on the peninsula, disappointed as a dinosaur nerd kid that there weren’t much in the way of dino fossils from California – which I mistook for “no interesting fossils at all”. Once in high school I visited some shark tooth sites in Scott’s Valley and became obsessed with marine mammal fossils none of the fossil collectors could identify. As an undergraduate student at Montana State University, I started collecting and researching a marine mammal fauna I discovered in Half Moon Bay; I continued with my master’s thesis at MSU on the preservation and stratigraphic context of Purisima Formation fossils, and then went to University of Otago in New Zealand to do my Ph.D. on early baleen whales from much older rocks down under. I have been at the College of Charleston in South Carolina, studying early baleen whales and dolphins, and once again researching Purisima Formation sharks, fish, birds, turtles, and marine mammals.” 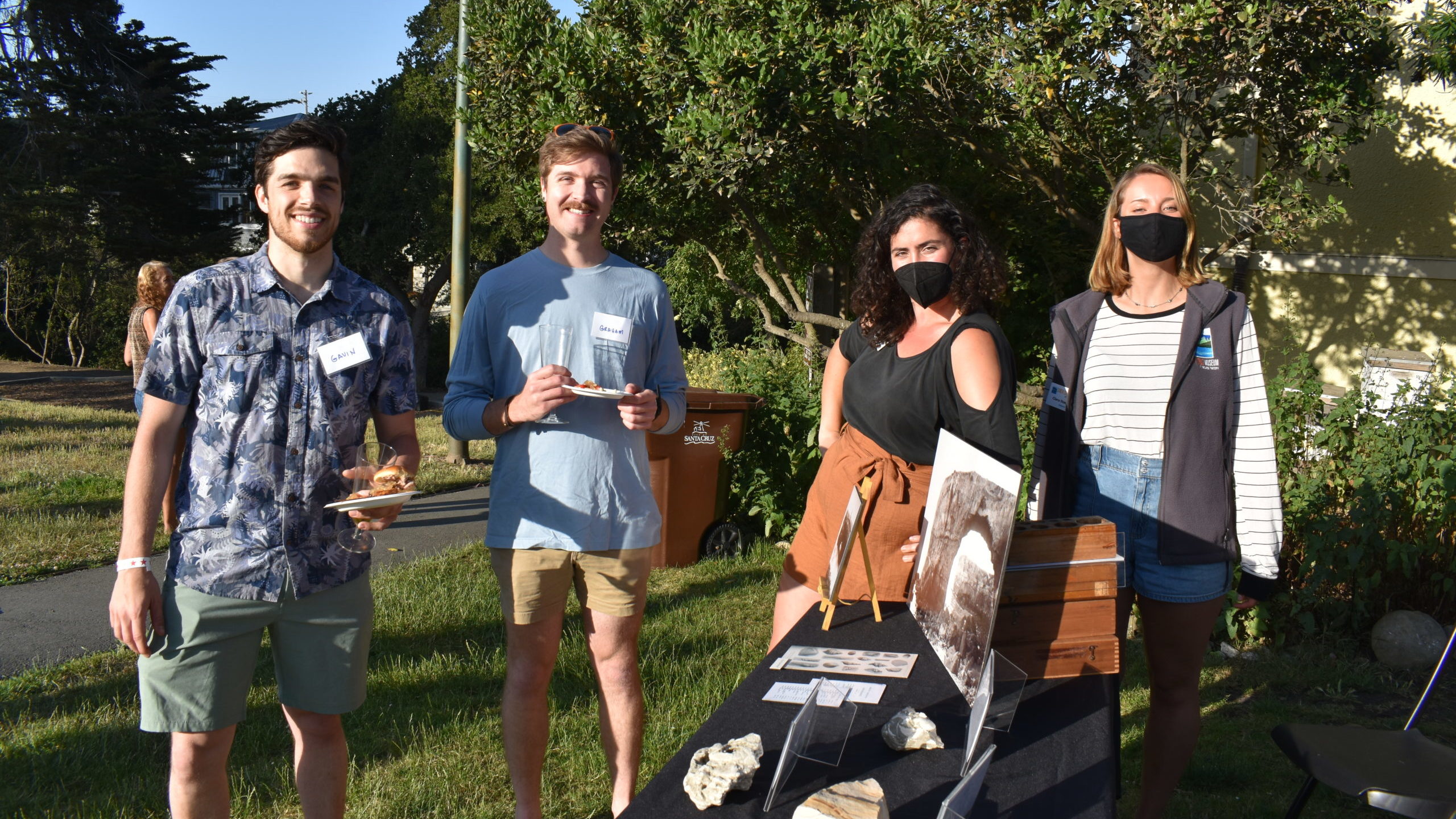 Join us for a Member-exclusive opening reception in celebration of our new exhibit Seeds: Nature’s Artful Engineering! We’re planning a festive experience outside in the park with opportunities for indoor exploration of the exhibit. Covid-safety details below.

Seeds: Nature’s Artful Engineering will be on view October 9-November 29, 2021. 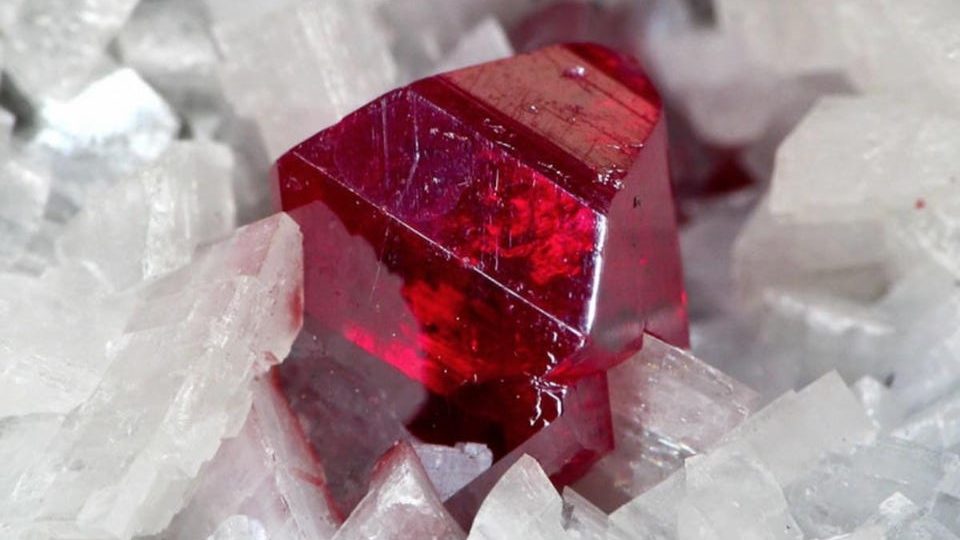 Some rocks are just stone cold killers. From asbestos to cinnabar, our natural world is full of toxic minerals, many of which appear in our everyday lives. Kick-off the Halloween season by digging into the dangerous side of geology during this month’s Rockin’ Pop-Up with Gavin and Graham — the Geology Gents.

About the Series: Join the Geology Gents, Gavin Piccione and Graham Edwards, for monthly conversations about rocks live on Facebook. Each month we’ll explore a different geologic topic, from Santa Cruz formations to tips for being a more effective rockhound.

Submit your questions ahead of time by emailing events@santacruzmuseum.org and feel free to include pictures of rocks you’d like identified! Note: you do not need to have a Facebook account to be able to watch the program live.