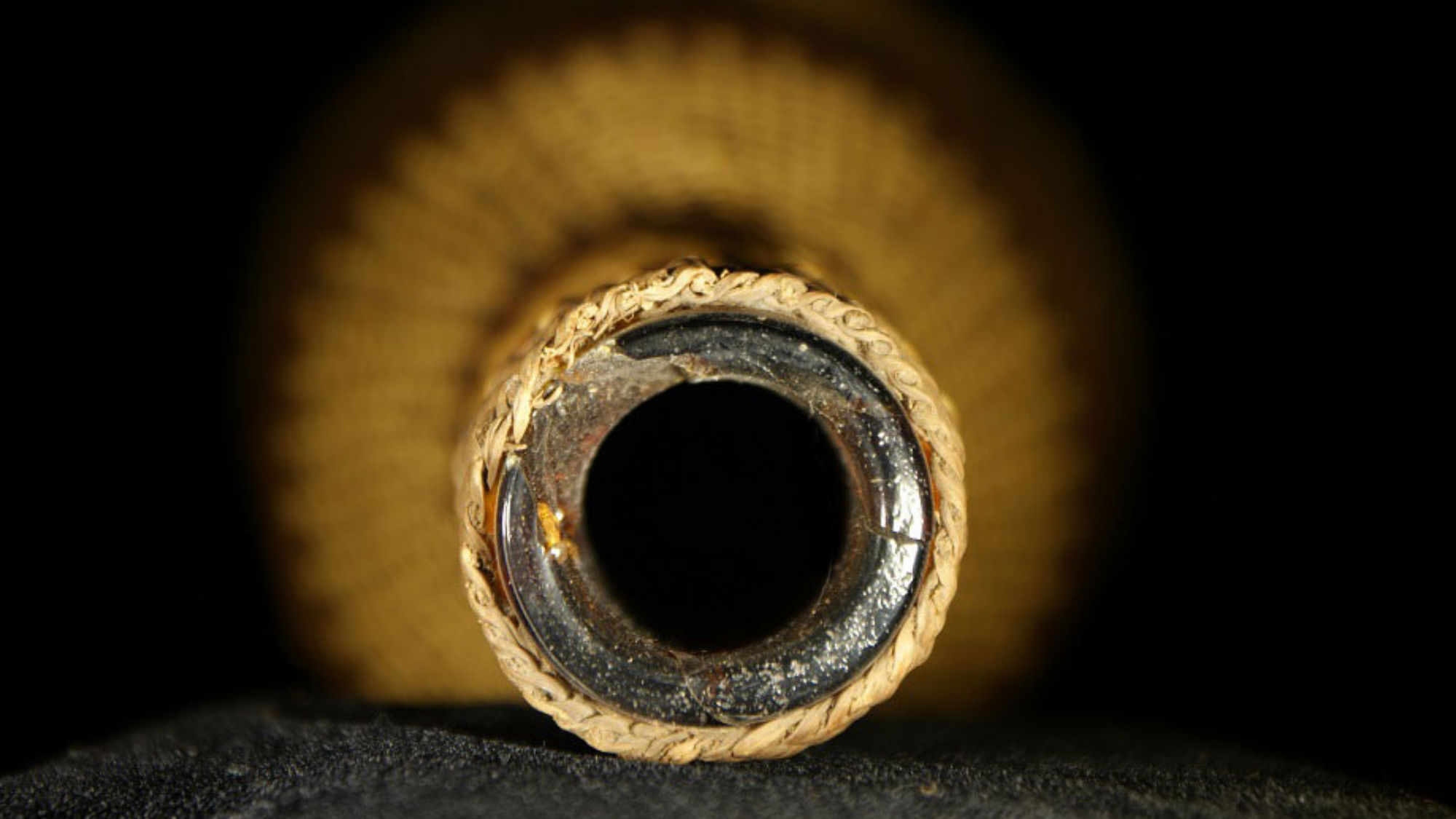 Walking down the collection’s basketry aisle, drinking in the breathtaking variety of shape, texture, and technique, a glint might catch your eye. Amongst the warm sheen of stripped willow shoot or the bright yellow of dyed porcupine quill, you might catch the unmistakable sparkle of glass. It might surprise you to find such a material on the basketry shelves. Last month we talked about how the spooky or the scary can spark learning opportunities, here at SCMNH we also seek to unpack surprises. Following that course, this month we will be digging deeper into one of the wonders of our basketry collections: a  “made for sale” basket.

Following this sparkling glass to its source, you would find a bottle-shaped basket, twined in warm browns and light yellows. The red-brown was likely from tule root, the yellow from tule or cattail leaves, and the black accent, dyed tule. The alternating stripes of color end in an attached coaster-like platform. Taking a closer look, you would discover that the shape arises from the glass bottle it overlays. The basket was collected in Northern California and is attributed to the Klamath River tribes. Today’s federally recognized Klamath River tribes are composed of the Klamaths, Modoc and Yahooskin, distinct peoples whose basketry traditions have similarities.

The absence of specific information about the basket’s weaver is contrasted by our knowledge of the collector. Maude Silvey was already a longtime resident of Santa Cruz by 1970, when she donated her personal collection of more than one hundred baskets to the great joy of museum staff and community. News articles of the time reflect the extent of her interest in baskets, where we learn that “Mrs. Silvey had visited northern California Indian tribes to observe weaving techniques and to obtain baskets for the collection.”

Her story unfolds against the broader backdrop of collecting trends at the time. Born in the 1880s, Maude Silvey’s early years coincided with the raging temperature of America’s “canastromania” or basket fever. Coined in 1904 by Smithsonian curator Otis Mason, this frenzied collection of baskets swept American culture from about 1890 to 1920. It was spurred by several factors; from the leisure time of an emerging middle class that was being lured west by railroads to the notion that baskets were primitive but pristine objects made by a doomed race that needed to be salvaged.  (For an incredible discussion of these interwoven complexities, check out Basket Weavers for the California Curio Trade, a book exploring the lives of Elizabeth and Louise Hickox, weavers from the Klamath River area).

Many well-known collections of California basketry were developed around this time, including that of the Hearst Museum of Anthropology. It was their Lawrence Dawson who helped identify and describe baskets in our own collection in the late seventies. A significant percentage of which were described as “made for sale”.

It seems like a straightforward term at first, applied to baskets made for commercial consumption, like the ones collected on Mrs. Silvey’s trip. Probing the meaning of this category, we might ask how such trips were planned, how the weavers were compensated, and how they emphasized traditional techniques or innovated with them. Early 20th century museums tended to deliberately obscure these kinds of commercial exchanges in their interpretations or avoid displaying baskets that diverged from anthropological understandings of tradition, treating indigenous weavers as if they were confined to the past rather than living craftspersons.

In examining these aspects of our collection, we find that our “made for sale” baskets fit two main types. Some baskets take traditional (a complex term itself, which we might also phrase as “in the style of objects made pre-contact”) forms and functions, and appear to have been sold to collectors unused. An example of these is a cooking basket with neither food residue nor burns from cooking stones.

The other type, which includes the bottle baskets, have forms or functions that are innovations from tradition. Traditional water carrying baskets in California Indian basketry would have relied on watertight weaving and some kind of sealant, rather than a glass center. Other baskets in our collection that follow this type include a tiered hanging shelf, a wall hanging plaque with a holding pouch, and others.

As National Native American Heritage Month, November is an opportunity for institutions to pay deliberate attention to the history and continuing culture of America’s indigenous peoples. Unpacking the words we use to describe the objects in our collections, especially across cultural differences and within the context of colonialism, is a critical component of good stewardship. To delve further into our basketry collections and the forces that shape them, check out this month’s Collections Close Up event on November 12th.