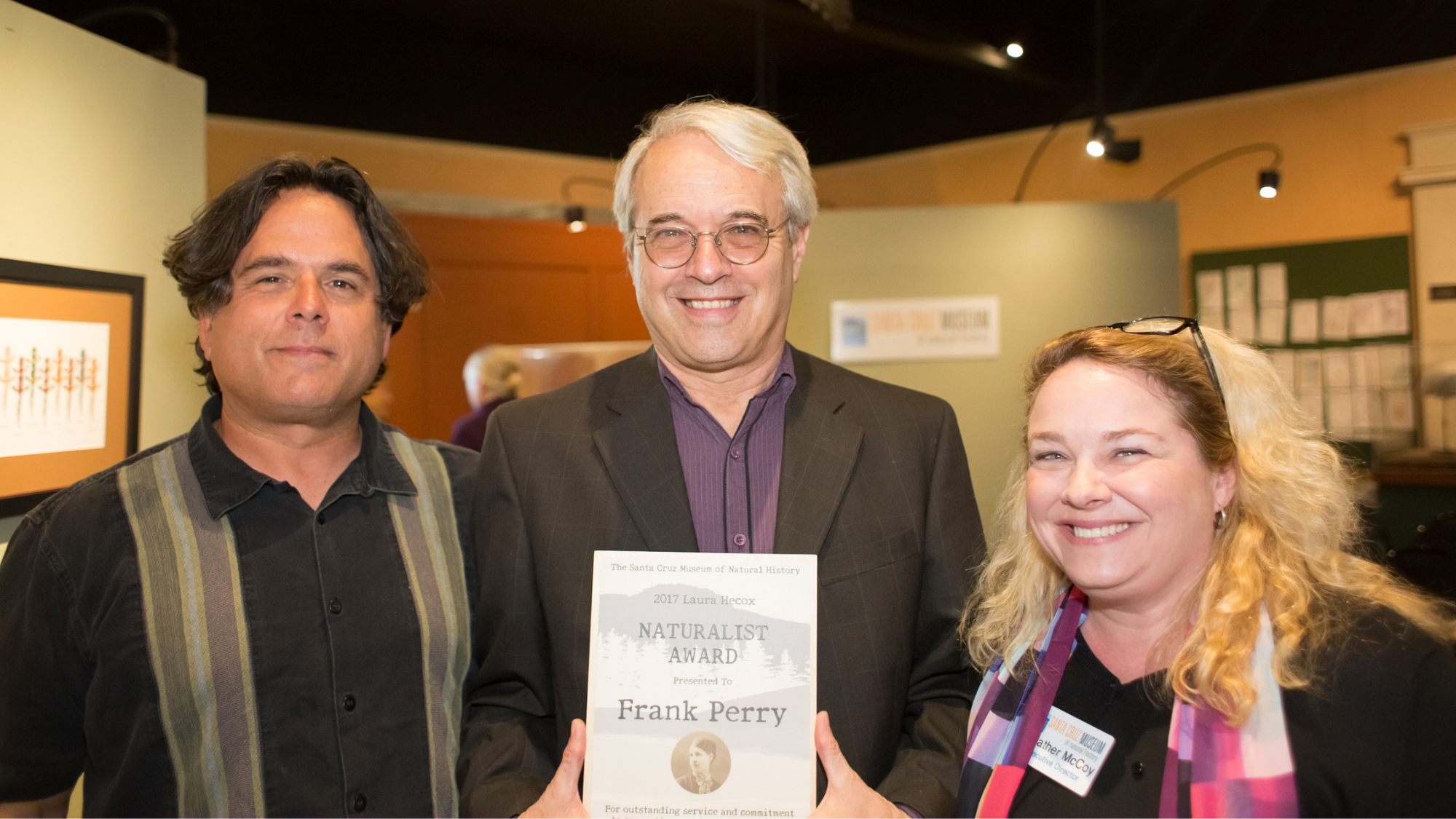 Frank’s professional relationship with the Museum dates back to his time as a student at Soquel High School, when a stint as volunteer led to a job during college. Several decades later, we are lucky to still have him today as a freelance exhibit creator and an irreplaceable resource of knowledge about our history and collections.

In June, the Museum presented Frank with the annual Laura Hecox Naturalist Award, which honors our founder’s love of nature. As a naturalist who is as comfortable leading a hike as he is examining fossils, Frank personifies the Museum’s mission of communicating the importance of the natural world.

Frank (center) was given the award by longtime Museum supporter Randy Widera (left) and Museum Executive Director Heather Moffat McCoy (right). In his introduction, Randy said: “Frank has a deep and relentless curiosity that has uncovered and brought to light so much of our natural, as well as cultural, history. To quote Frank, ‘You can’t separate human history and natural history.’ By combining both, Frank uses them as a lens to focus and share his insights and discoveries with all of us.”

After volunteering to catalog fossils at the Museum in his teens, Frank was hired to work the front desk on Sundays. He was employed at the then city-owned museum throughout his college career, first at Cabrillo College and later at UC Santa Cruz, where he earned a degree in Earth Sciences. One of Frank’s professors was Dr. Gary Griggs, the renowned marine sciences researcher who received the first-ever Laura Hecox Award in 2016.

For Frank, building a career around museum life was a natural fit. “As a kid, I loved museums and had my own nature museum at home,” he said.

“I learned about the way things work in a museum, but I also just learned the kinds of things every young person does when they get a job and need to make it in the world,” Frank said. “I learned how to make change, talk to the public and get along with people.”

Frank went on to work for the California Academy of Sciences in San Francisco as a curatorial assistant before coming back to Santa Cruz and working most of his career as a freelance exhibit creator for the Museum of Natural History, as well as other museums and park visitor centers in Monterey, San Mateo and Santa Cruz counties.

As someone who knows the Museum’s collections better than nearly anyone, Frank also was hired in recent years to help the Museum deaccession items determined not to be central to its mission, an ongoing process that has resulted in transferring more than 100 items to the Museum of Art & History and other museums.

Frank became the Capitola Historical Museum’s curator in 2013 and also serves as a member of the Collections Committee of the Museum of Natural History. In September, the Museum will premier a new temporary exhibit by Frank called “Rocks and Waves.”