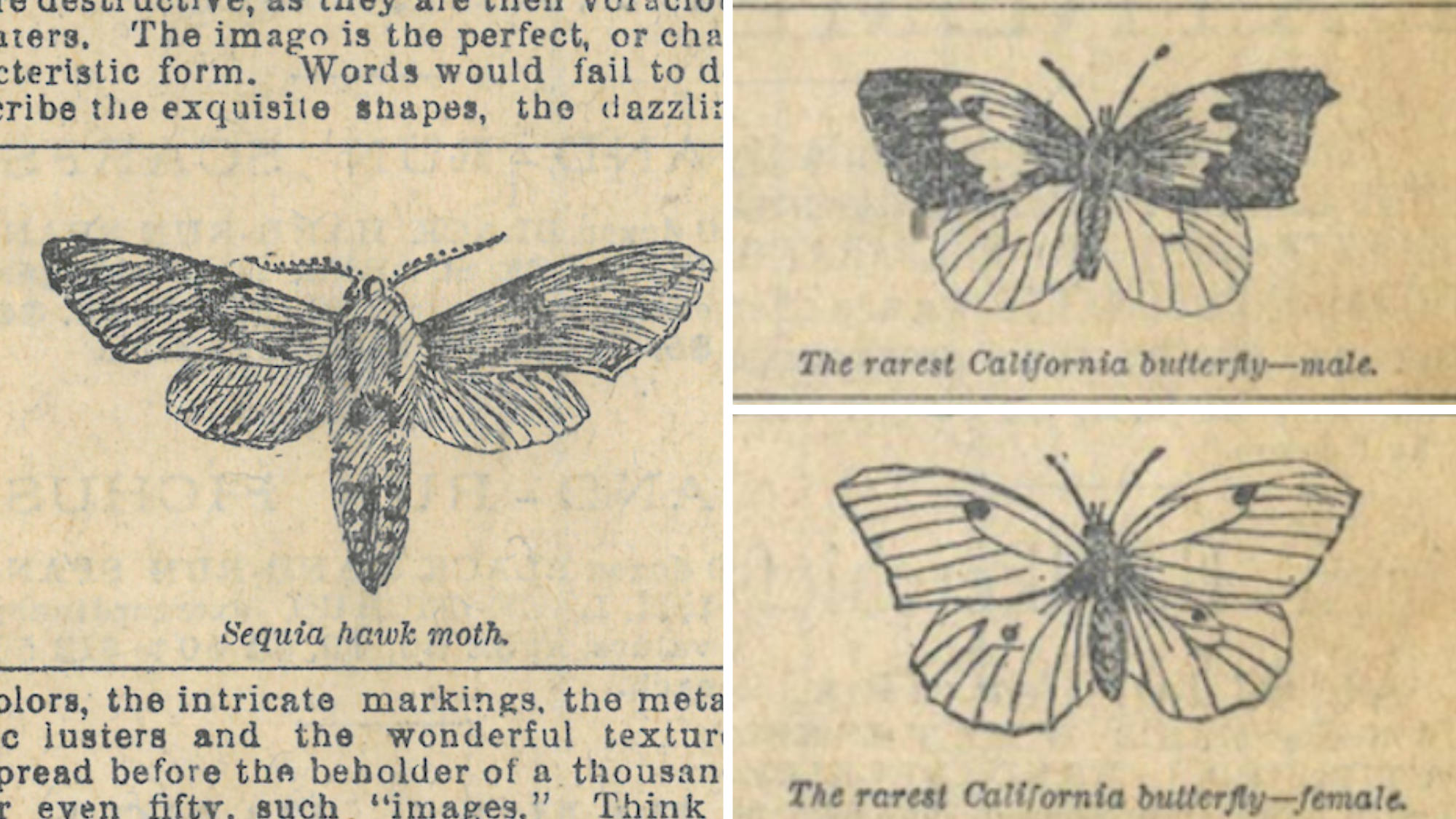 Brightening the entrance to our upcoming Pollinators exhibit is a striking display of Lepidoptera — the order of insects that includes butterflies and moths. Three cases contain a selection of species demonstrating a stunning scale of diversity. They are eye-catching in many ways, but not least for the variation of the coloring produced by the tiny scales that cover their wings: sunburst yellows of the swallowtail family, the subtle soft tones of a selection of moths, and the spectrum of colorways from different locally collected species. And while we are equally delighted that the exhibit highlights a range of pollinators, from beetles to bats, we can’t deny the charisma of these fluttering creatures. We are far from the first to be so captivated.

For this month’s Collections Close-Up, we look through the lens of butterflies and moths to explore the early entomological context of our Museum.

Foundational collector Laura Hecox, who was born 168 years ago this month, was renowned for her lighthouse museum, and celebrated for gifting it to the people of Santa Cruz. Contemporary accounts describe the delights of her collection, highlighting shells, fossils, and curios, as well as stuffed birds, eggs, and nests. It is applauded for its richness, display, and classification – but no mention is made of insects in these early accounts. Further, insects were not mentioned in  the earliest inventories of the collection upon its arrival here in Seabright. Yet, they were ultimately not neglected: in a 1905 article describing local collections that were given to the library museum to complement Laura’s, the Santa Cruz Sentinel describes the addition of “a collection of beetles, bugs, and butterflies, etc., from Napa, by Master W. Switzer of Napa.”

While it is exciting to see that the earliest days of the Museum inspired participation beyond Santa Cruz, we know from Laura’s own catalog books that it was not unusual for her to collect via gift or exchange with collectors from around the world. Moving beyond geography, it is also interesting to look at this inclusion of insects against the backdrop of the popularity of entomology in the United States. In his article “Insects in the New Nation,” written for the American Entomologist in 1985, Jeffrey Barnes traces the story of how Victorian naturalists generally, and Americans in particular, roused popular interest in entomology later than interest in other elements of natural history. American entomology, when it did get going in the last few decades of the 19th century, was influenced not only by the desire to describe the virtues of the humble insect but also for its potential to aid the economic engine of American agriculture.

This is reflected in some of the history of entomological organizations, such as how the American Association of Economic Entomologists, first founded in 1889, transformed in 1906 into the Entomological Society of America to appeal to a broader audience.

But what of our Laura, inspirational naturalist, avid student of small shelled creatures at sea and on land — did her interests extend to insects? Beyond the contents of the Laura Hecox collection and early primary sources in newspapers articles, it’s hard to know. But returning as we have before, to Laura’s scrapbooks, we can see that creepie crawlies did not escape her notice.

From clippings on the food habits of the carrion beetle to a poem about the “humble bee”, insects show up in a variety of articles. Perhaps most striking is this story on the “Rare Butterflies – A Collection Half a Century Old”. Detailing the gift of thousands of specimens by one Dr. Behr in the late 1890s to the California Academy of Sciences (founded in 1853, the year before Laura was born), the article covers many of the same insect issues we’re interested in today. From highlighting local specimens, to changing population trends, to the challenges of safely sharing out these fragile specimens – we see that science communication of yesteryear sought to impart some of the same kinds of information we still care about.

An example of this continuity can be found in one of the specimens the article’s author is most excited about – what is now called the Zerene eurydice, or California dogface butterfly. While this so-called “rarest butterfly” of California is not listed as threatened or endangered, it still captivated the people of California almost a century later when it became the state insect in 1972. Of course, not even the expansive curiosity of a naturalist has to be drawn to everything, and many of Laura’s contemporaries were plenty enchanted by entomology, as described in Barnes’ article and others.

Stop by the Museum to explore your own interests, of butterflies and beyond, beginning with our Friday, January 14 Member’s opening for Pollinators: Keeping Company with Flowers. For more on Laura, take a trip with us into the 19th century for our Laura Hecox Day festivities on Saturday, January 29.