Take a stroll through the grounds of the Museum within Tyrrell Park and you will discover an array of habitats and plants that are native to the Central California Coast. These demonstration gardens support a wealth of insects and birds, and have also been a favorite location for spotting fungi in the winter months. Visit the garden in different seasons to discover what’s in bloom.

How to Use this Guide

Use the map to find which section of the garden you are in and use the links below to jump to your section. Click on the individual species images to learn more about the plants and their adaptations.

Flowering plants demonstrate a wide variety of ways to attract pollinators, including shape and color of flowers, smell, and blooming during seasons when many other plants do not. Do you see insects and birds collecting pollen in this section of the garden? The Museum’s observation beehive has an outlet above this garden and honey bees are a frequent visitor. 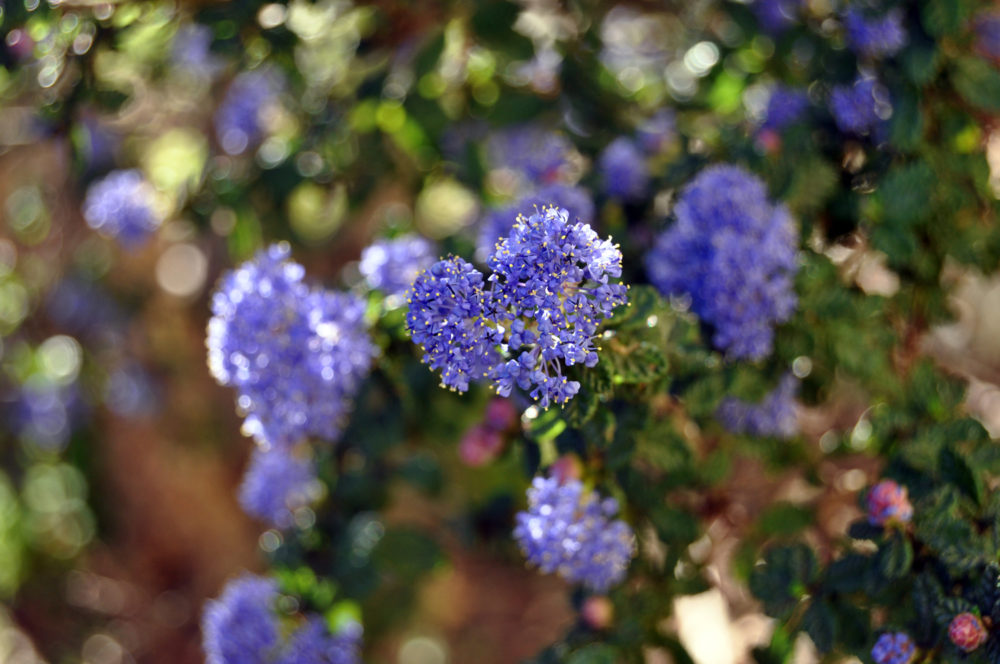 Dark Star Mountain Lilac (Hybrid Ceanothus sp.) | The native shrubs from this genus produce wonderfully fragrant flowers that span many shades of blue, with some pink and white as well. This gorgeous shrub is drought tolerant and can withstand the salty spray from the nearby ocean. 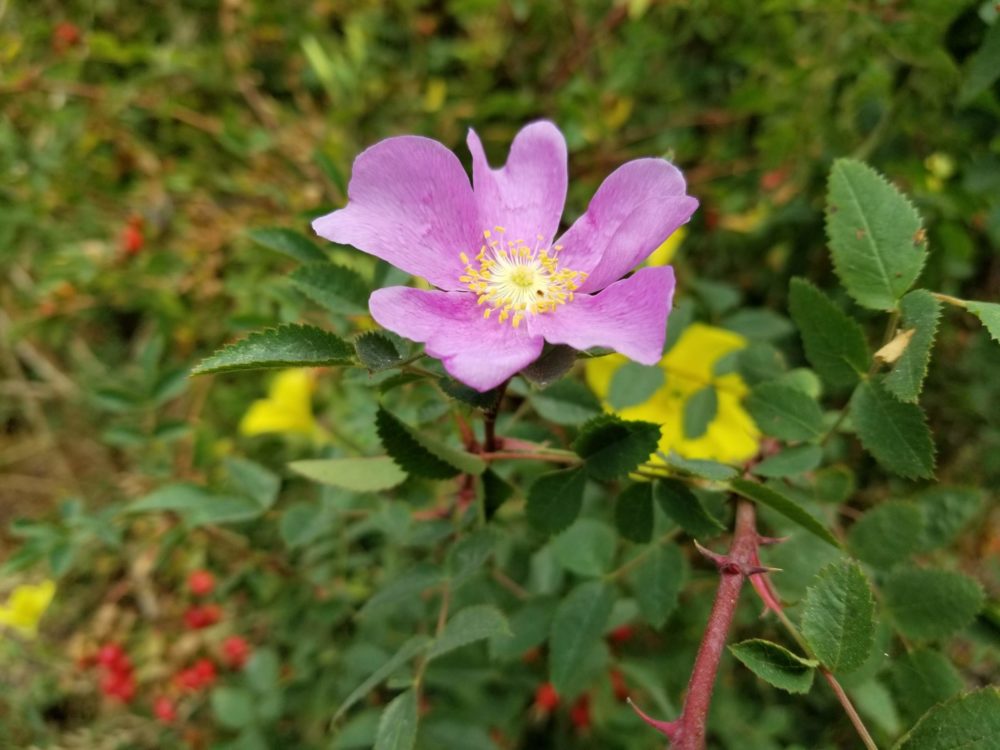 Wild Rose (Rosa californica) | Mutsun: mamawkwa | Wild rose hips are rich in vitamins, and can be gathered and steeped to make tea. They also provide a source of forage for browsing animals such as deer in the winter when many other foods are not available. 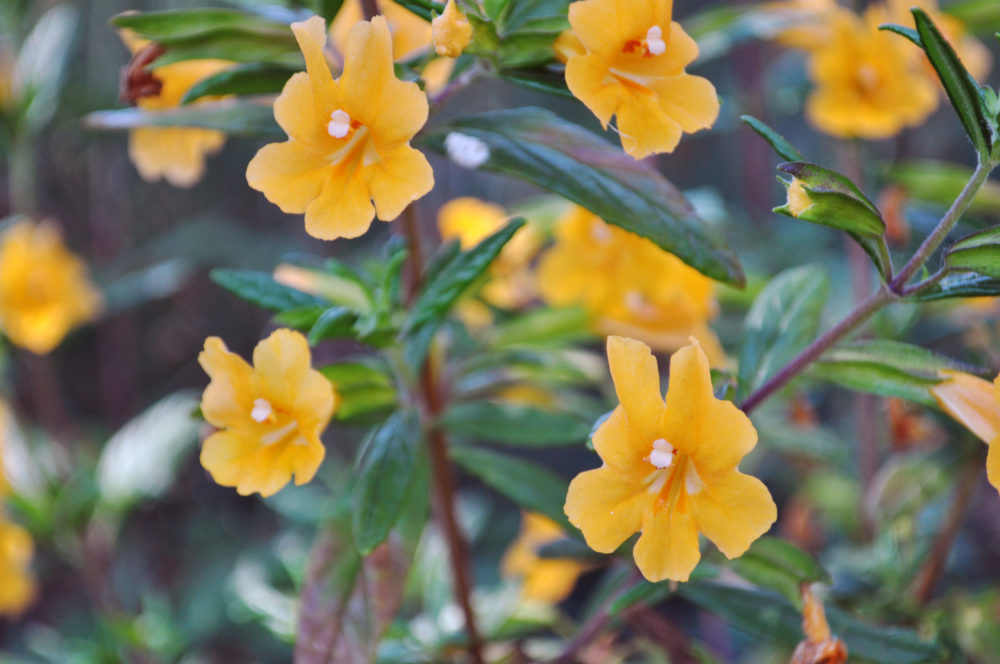 Sticky Monkey (Diplacus aurantiacus) | Able to thrive in many different habitats, this shrub produces a rich nectar and is an important food plant for buckeye butterfly larva. The leaves have a resin that tastes bad to browsing deer, and makes them slightly sticky to the touch. 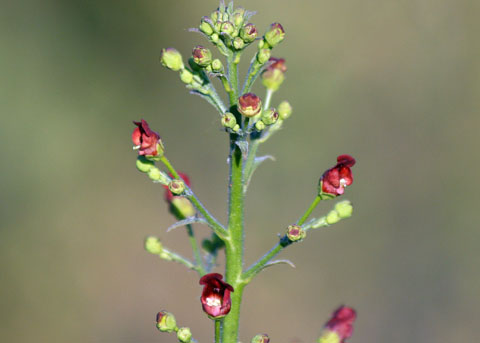 California Bee Plant (Scrophularia californica) | Aptly named, this plant produces small, dark red flowers that are the perfect size for honeybees to crawl into. Bee plant attracts its pollinators mostly with the sweet scent from its blooms. 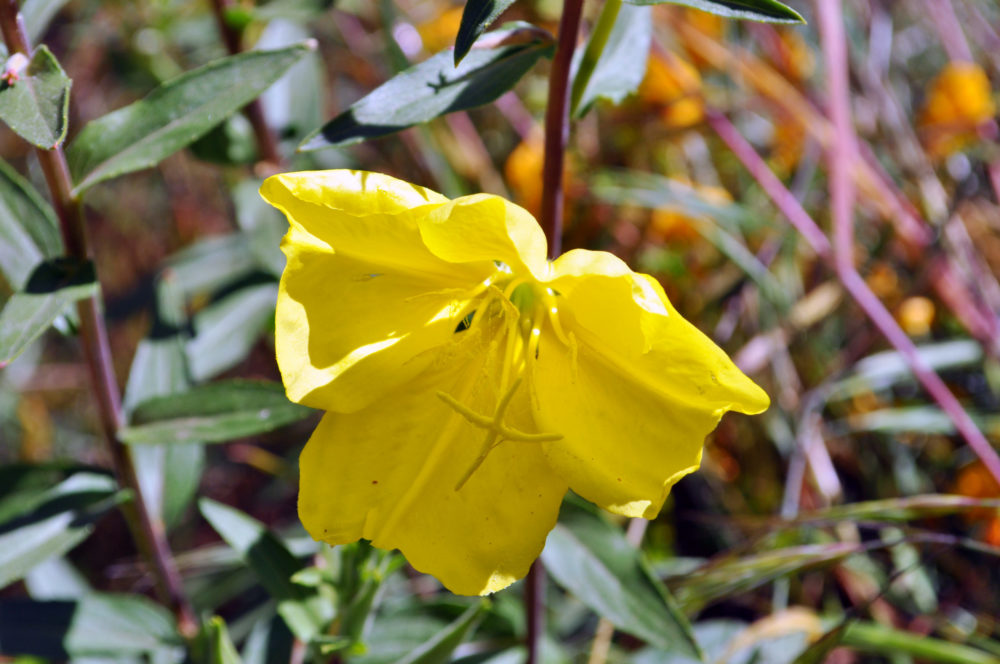 Evening Primrose (Oenothera elata ssp. hookeri) | This subspecies of evening primrose can grow up to six feet tall, and are frequently pollinated by moths and insects that are active at night. Although native to California, it can become quite weedy and outcompete other, smaller shrubs and flowers if not managed. 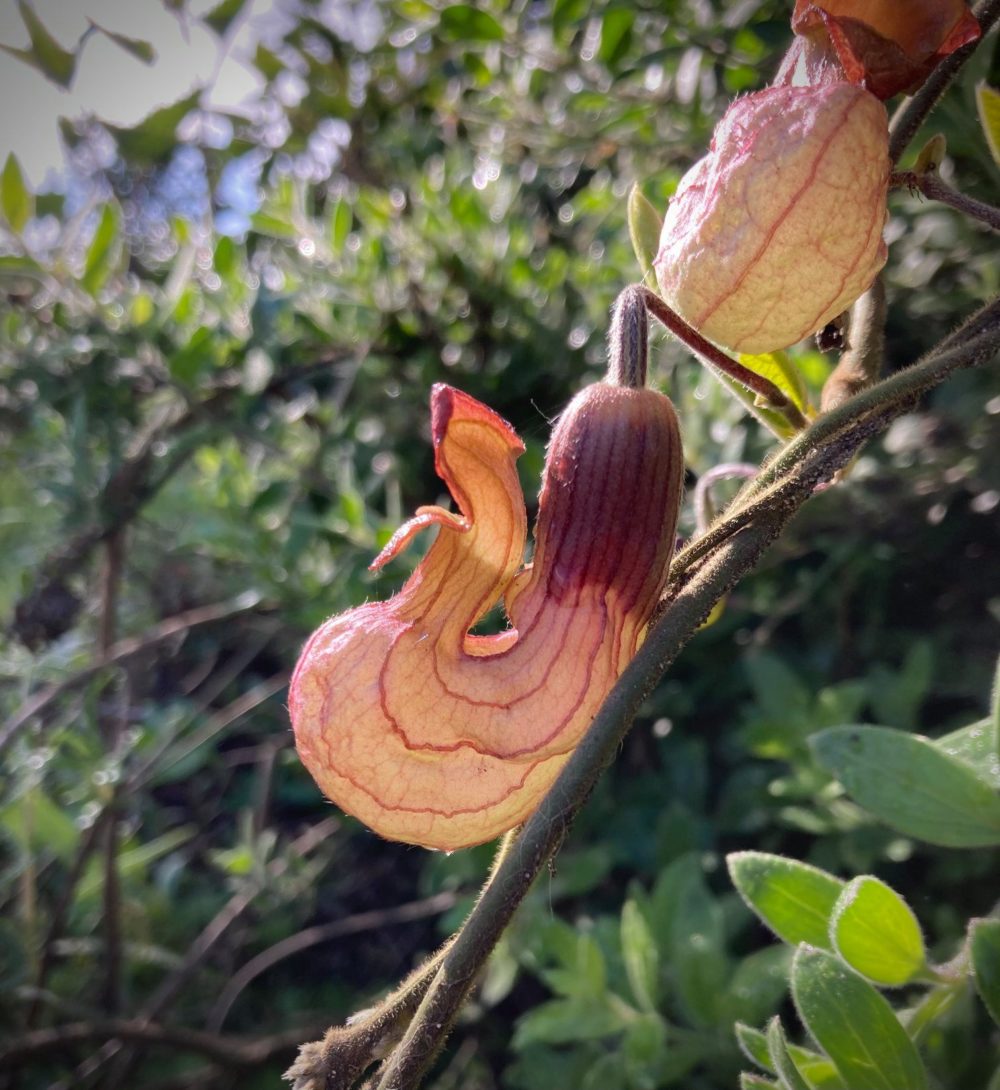 California Dutchman's-pipe (Aristolochia californica) | Caterpillars of the pipevine swallowtail butterfly use this plant as a safe place to metamorphose. When the caterpillars emerge, they gorge themselves on the leaves, toxic to most, but tolerable to this butterfly species. This endemic plant's heart-shaped leaves give off an odor that attracts pollinating flies and gnats. 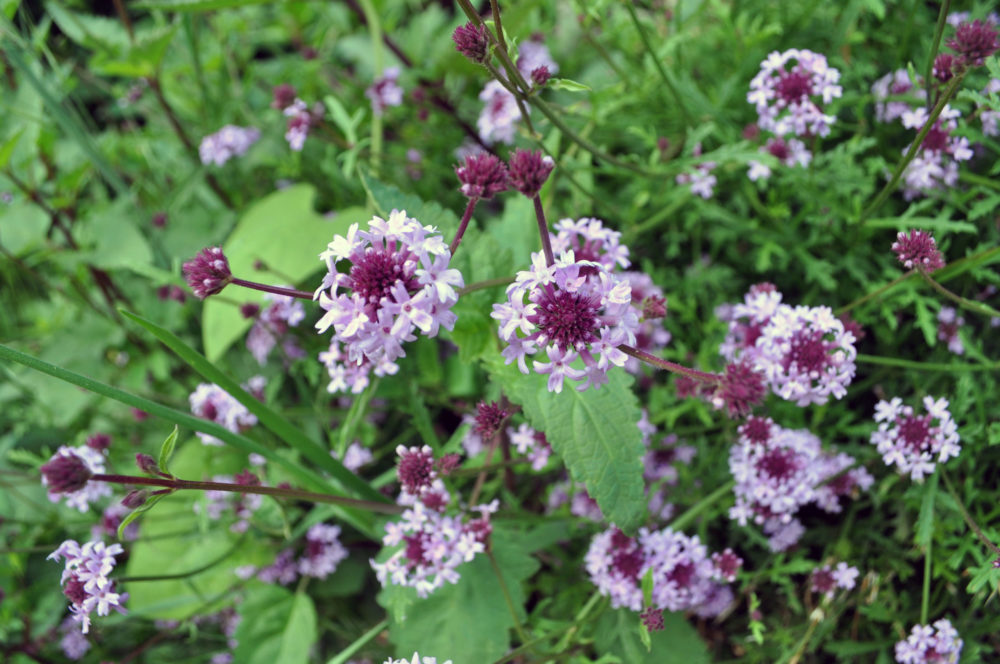 De La Mina Verbena (Verbena lilacina ‘De La Mina’) | Originally from a small island off the coast of Baja California, this flowering shrub blooms for long stretches of time, often persisting through winter and long into summer after other plants have gone dormant.

Composed of a mixture of deciduous and evergreen trees, shrubs, with shade-tolerant plants in the understory, woodlands provide food sources and a varied habitat for numerous animals. Do you see any birds or mammals using this habitat? 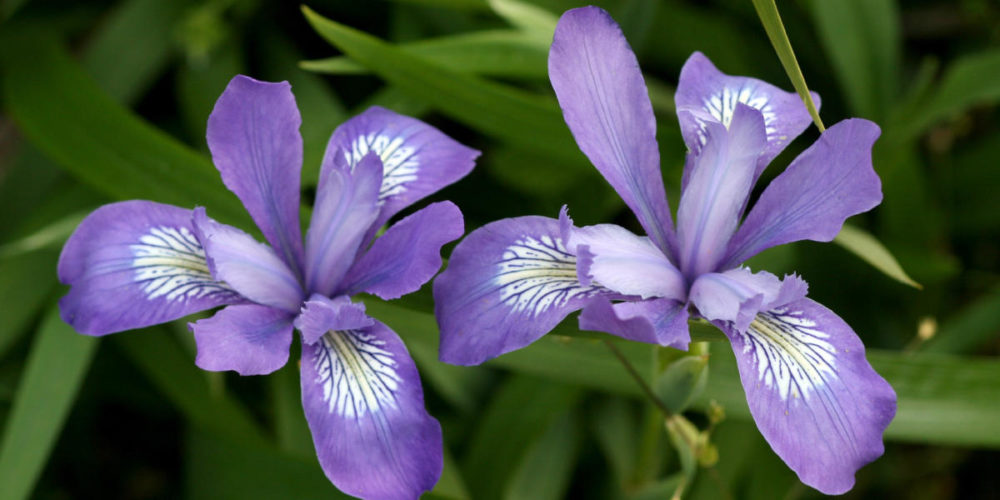 Douglas Iris (Iris Douglasiana) | A common plant in woodland understories and along grassland edges, these irises create large purple flowers in spring and early summer. The fibrous leaves of these irises make them ideal plants for making cordage and baskets. You may also spot these irises in our Creekside garden, or in a variety of colors like white and yellow. 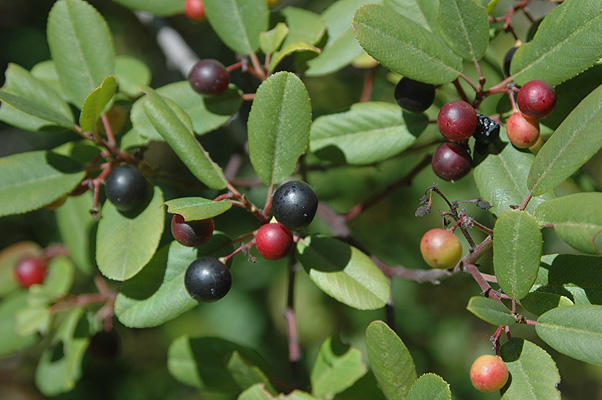 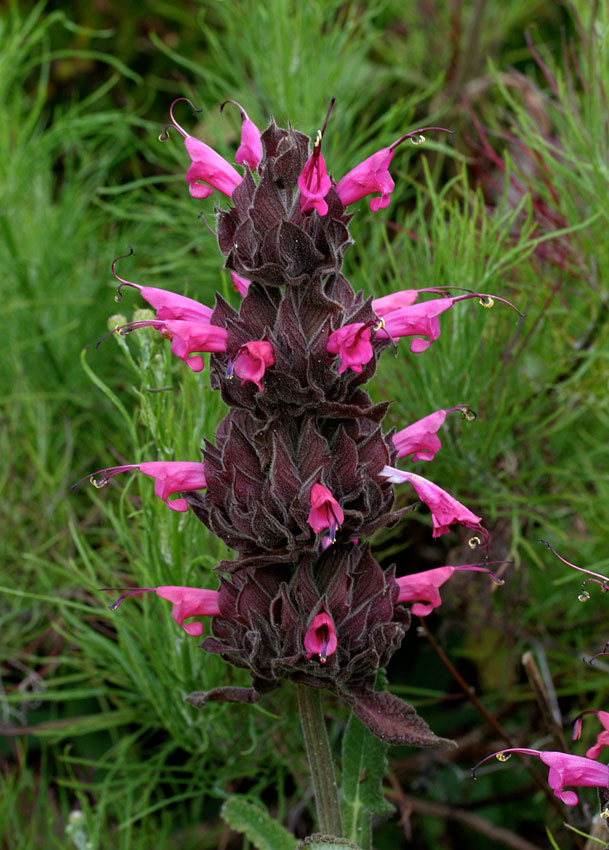 Hummingbird Sage (Salvia spathacea) | This relative of mint grows well in shady woodlands and coastal chaparral, and is quite drought tolerant, making it a good candidate for landscaping. Blooming March through early summer, pollinators flock to the reddish purple flowers which resemble miniature trumpets. 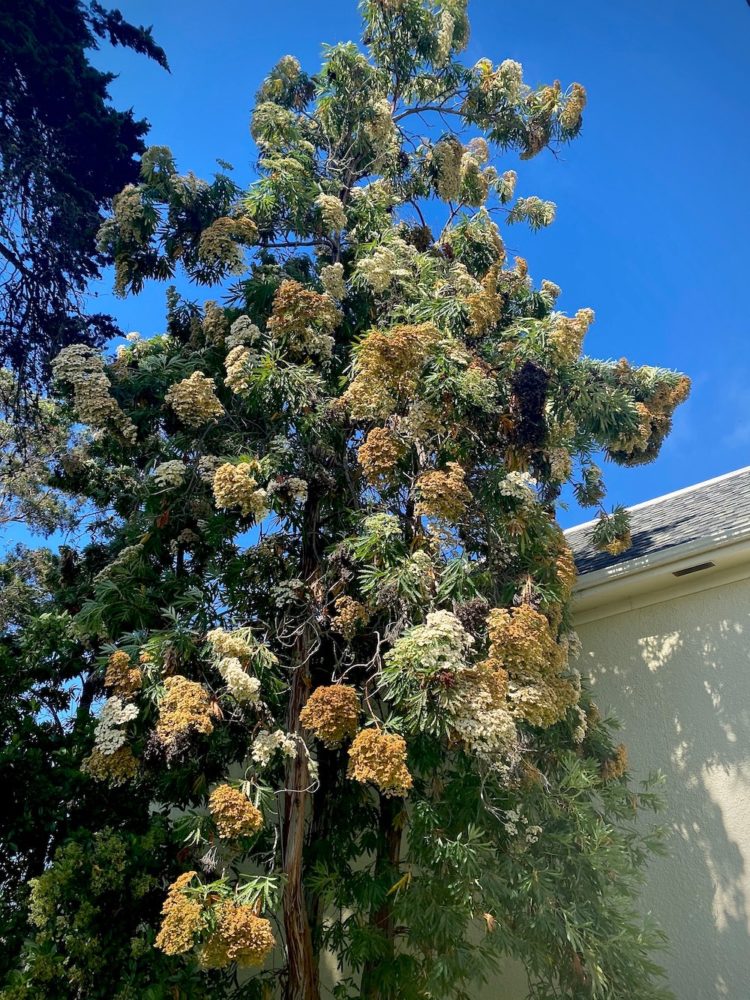 Santa Cruz Island Ironwood (Lyonothamnus floribundus ssp. asplenifolius) | You may think of roses as showy shrubs, but there are many trees within the family Rosacea, and they can be quite showy themselves! This ironwood is not native to our county but it is a rare example of this type in our region. 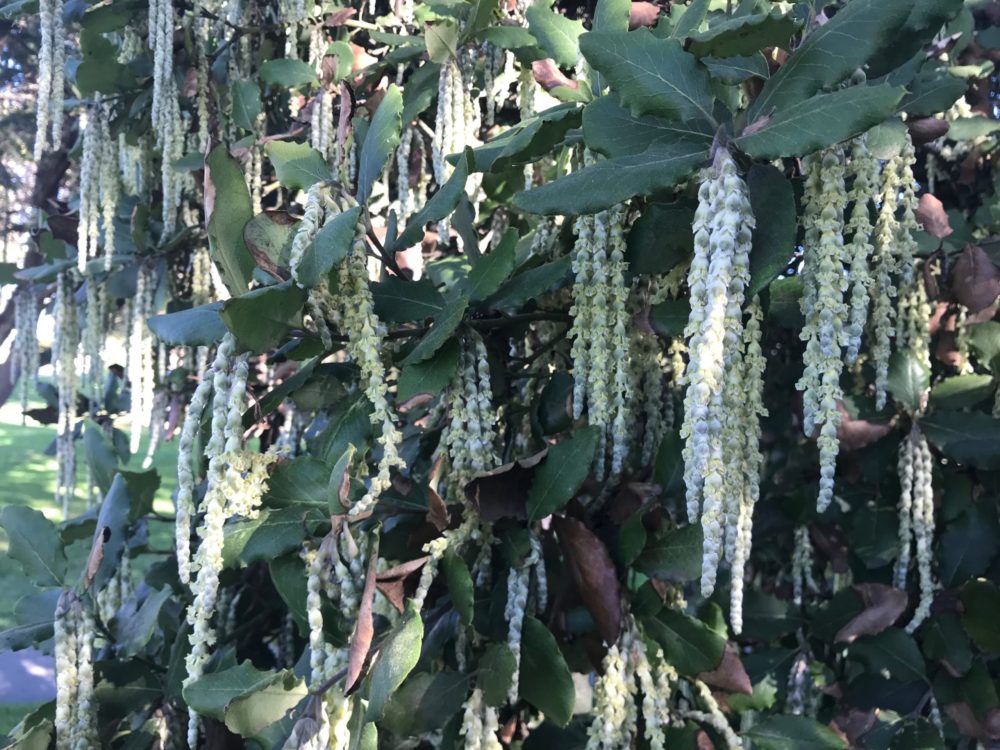 Coast Silk Tassel (Garrya elliptica) | Native to the coastal ranges of California and southern Oregon, the silk-tassel tree is evergreen with broad dark-green trees. Like many tree species of mixed woodlands, it flowers early in the season so that it has a good start on making its seeds before other tree species leaf up, and moisture and light become scarce.

Many creekside plants aid in filtering pollution and sediment out of water, and prevent erosion. They provide shelter, food, and nesting materials for various birds, reptiles, and amphibians. Many of these plants have been used by Native Californians for making baskets and other tools. 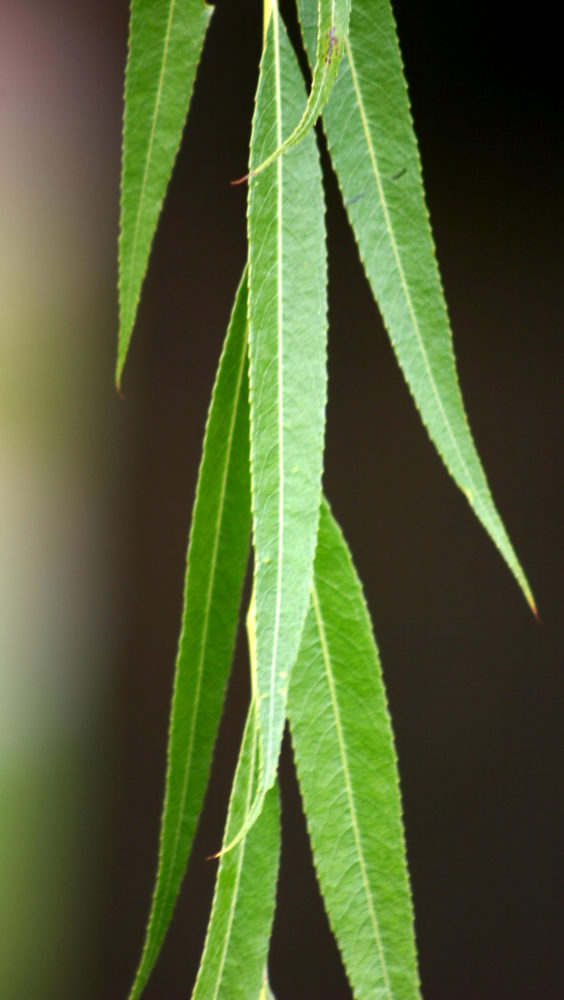 Arroyo Willow (Salix lasiolepis) | Awaswas: ewi | Most often found near water, willows are known for their flexible branches, and have been traditionally used for basket weaving by Indigenous people for generations. A chemical compound in the bark and leaves of willows can be brewed into a tea to treat pain and fevers. Find these trees along Pilkington Creek. 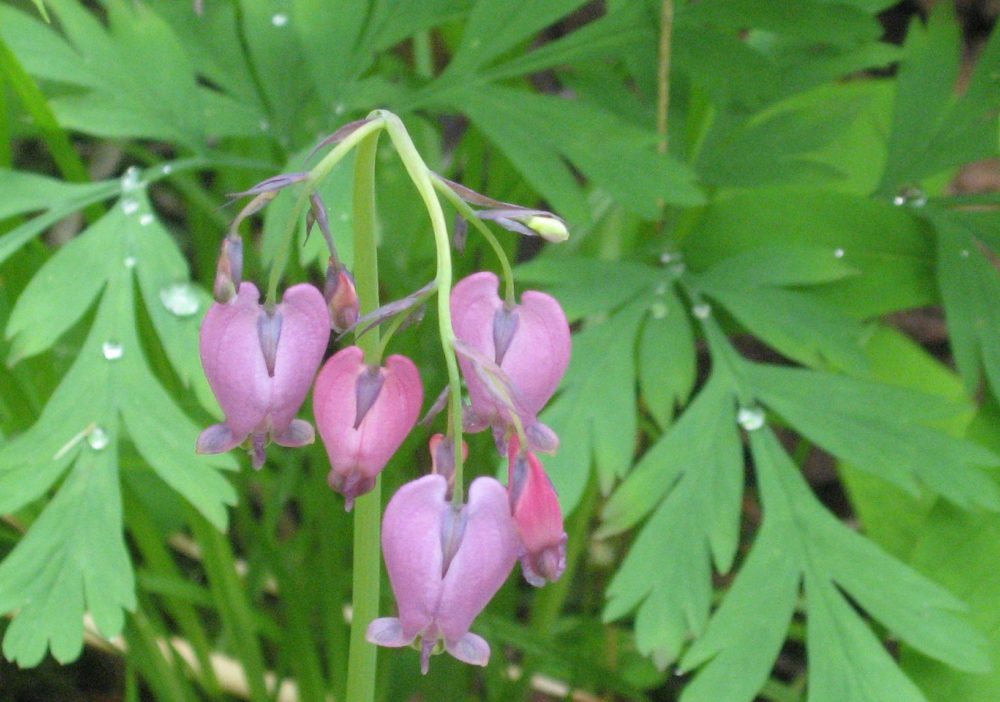 Pacific Bleeding Heart (Dicentra formosa) | This perennial appeals to pollinators and is native to California, where it can be found in moist woodlands and along stream banks. The peak flowering season for bleeding hearts is the spring, and it may go dormant in the summer, but then bloom again in the autumn. 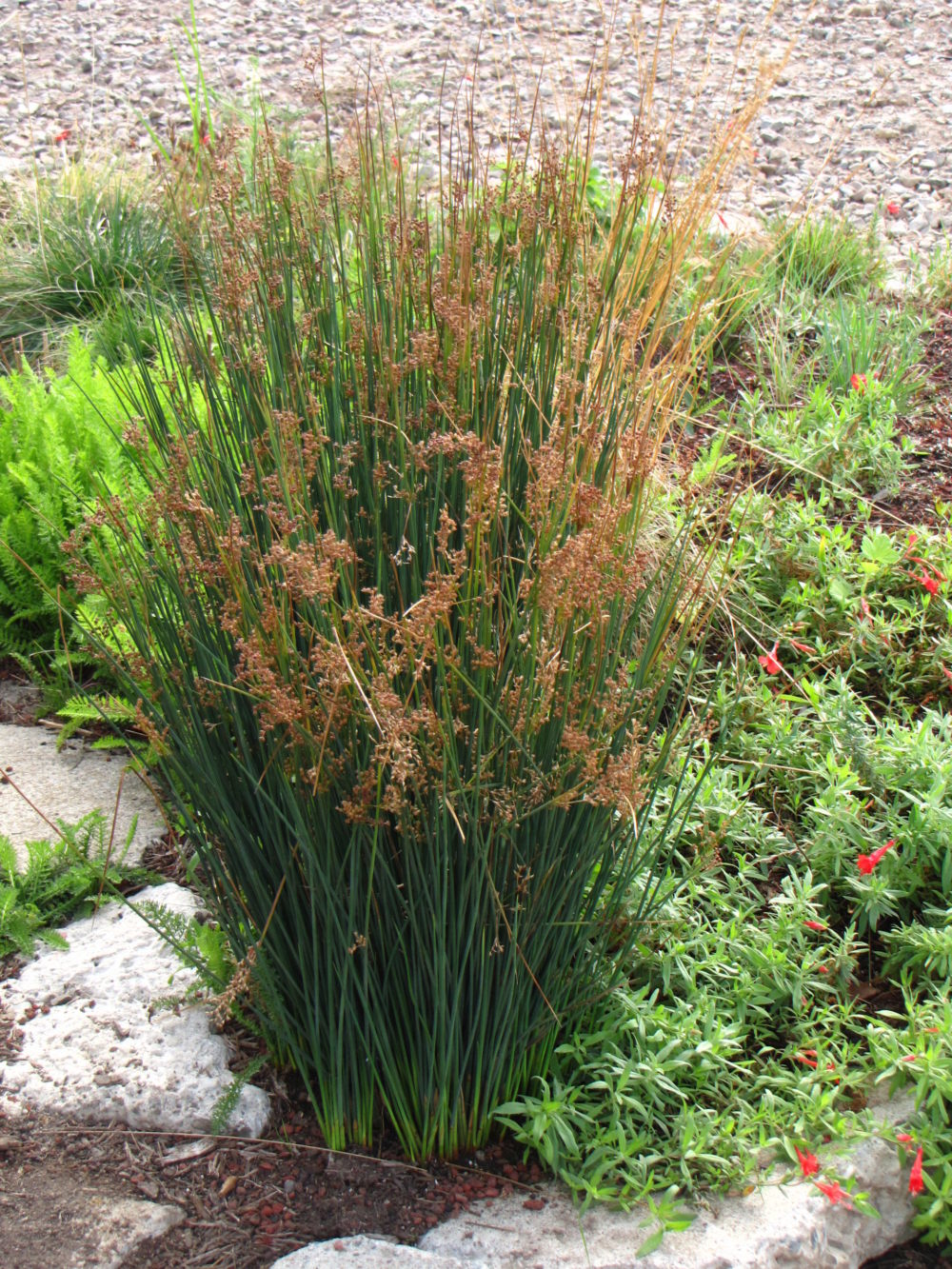 Common Rush (Juncus patens) | Mutsun: kaamun| Rushes are most frequently found in wet, marshy grasslands or near creeks or other bodies of water. They have been used for generations for basket weaving due to their long, straight, flexible stems. 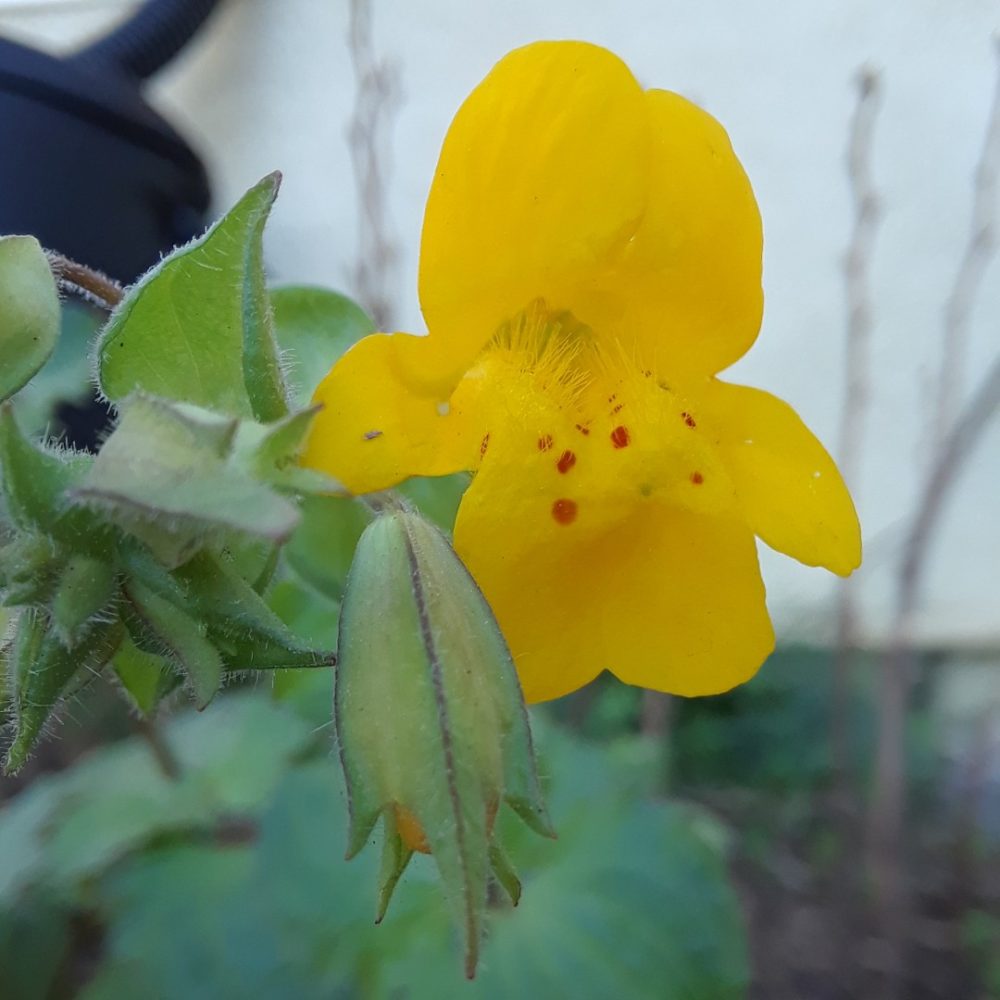 Seep Monkey Flower (Erythranthe guttata) | These pollinator-attracting wildflowers can be found in a wide variety of habitats, but are most often associated with fresh water seeps and wetlands where their roots effectively filter water. The red dots on the flowers distinguish them from sticky monkey flowers which can also be found locally and in our garden. 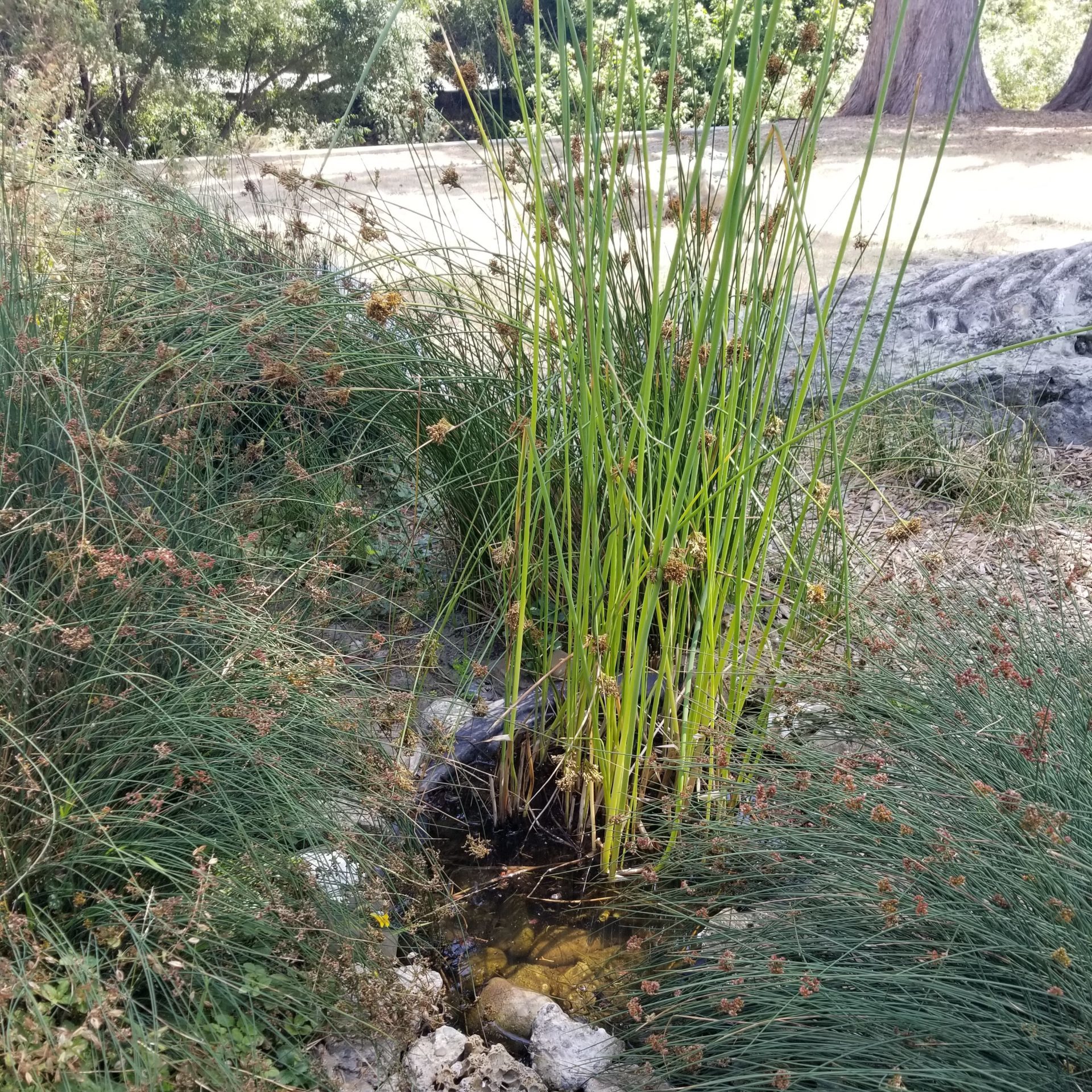 Tule (Schoenoplectus sp.) | Awaswas: rookosh | While tule can withstand periods of drought, they do best when the rhizomes are submerged in up to a foot of standing water. Here they are in a trough submerged into the ground, which is filled with water from our rainwater collecting system. 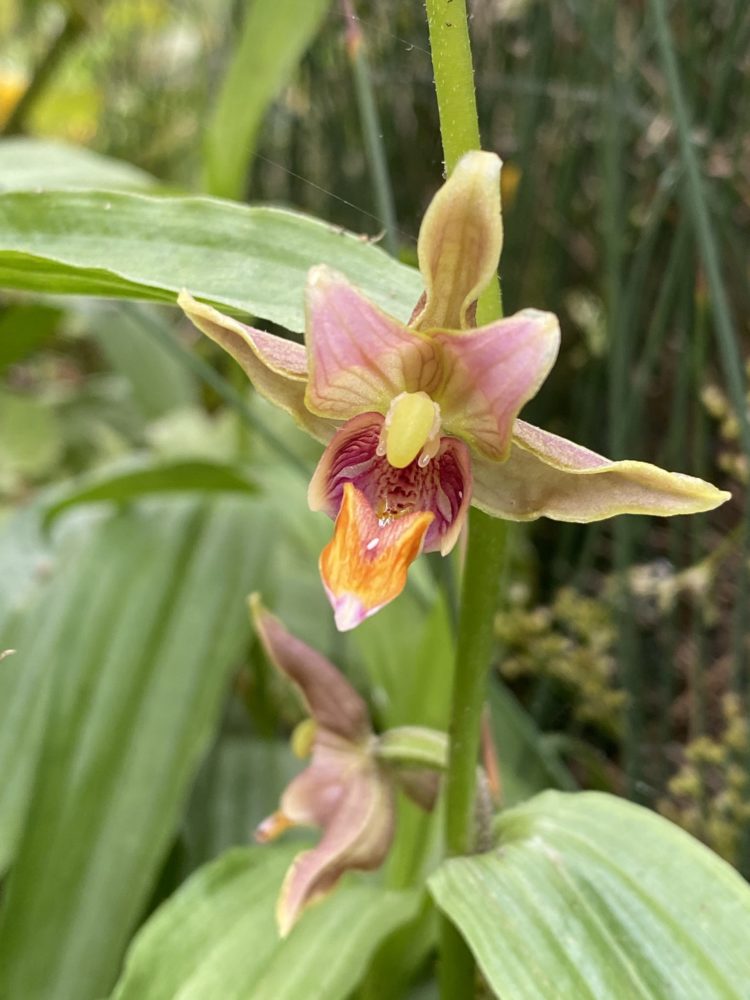 Stream orchid (Epipactis gigantea) | Also known as giant helleborine, this is one of the most common orchids on the Pacific coast. It prefers to be in wet environments, and it requires the presence of mycorrhizal fungi in order to germinate. 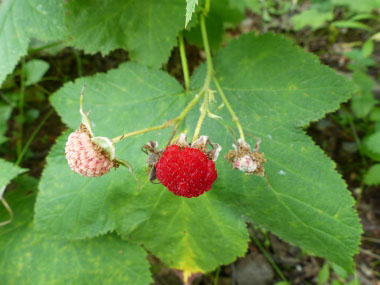 Thimbleberry (Rubus parvifolius) | Thimbleberry grows along streams or in very wet soils. They sport soft, broad leaves, and their berries ripen and turn red in the summer, and have been traditionally gathered for many years.

This species-rich, coastal landscape mosaic is adapted to dry summers and coastal fog. It provides habitat and food for many animals, and is characterized by flowing grasses and annual flowers. Coastal terrace plants have deep roots to tap into water underground and they stay green longer than invasive plants with shallow roots. 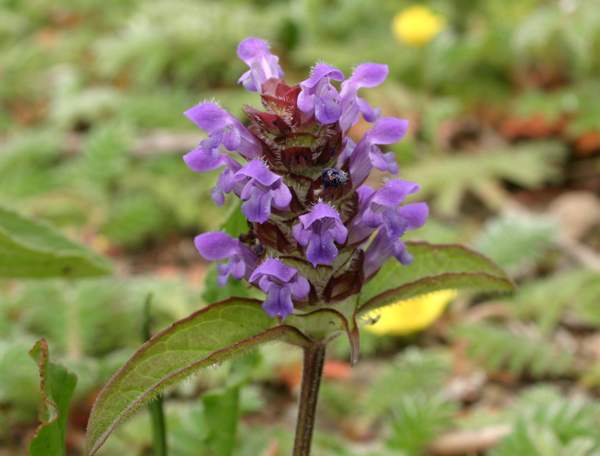 Self-heal (Prunella vulgaris) | In addition to attracting pollinators, this edible plant has long been used as a remedy for a variety of ailments, including sore throats and muscle aches. Some of its other common names include heal-all, woundwort, heart-of-the-earth, carpenter's herb, and brownwort. 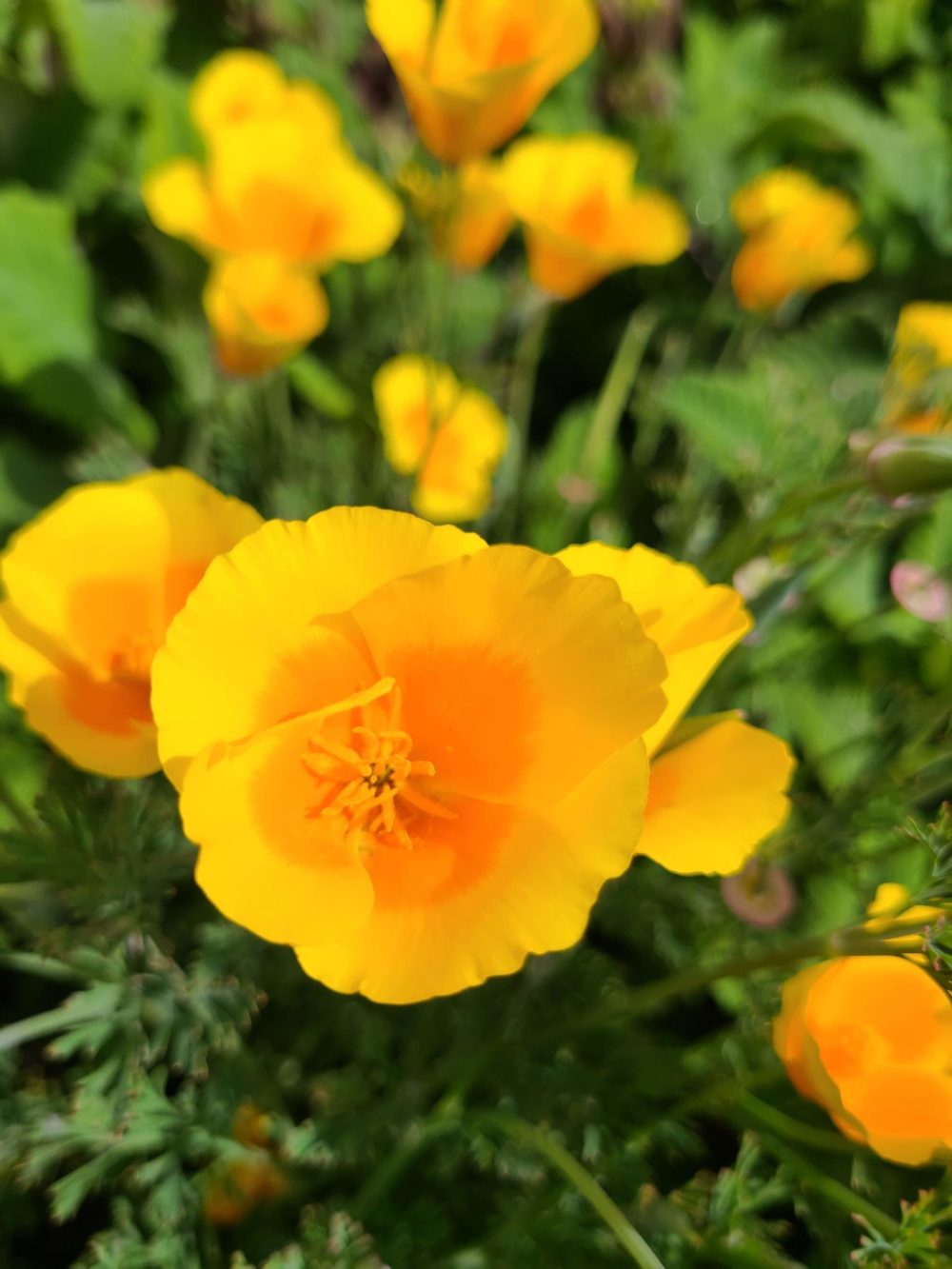 California Poppy (Eschscholzia californica var. maritima) | Poppies can be both annual or perennial, meaning they may live only for a single growing season, or in more favorable climates for 2-3 years. The particular variety of poppies found along the coast and in Santa Cruz is the maritime poppy, which can be recognized by the yellow outer edges of the petals and bright orange center. 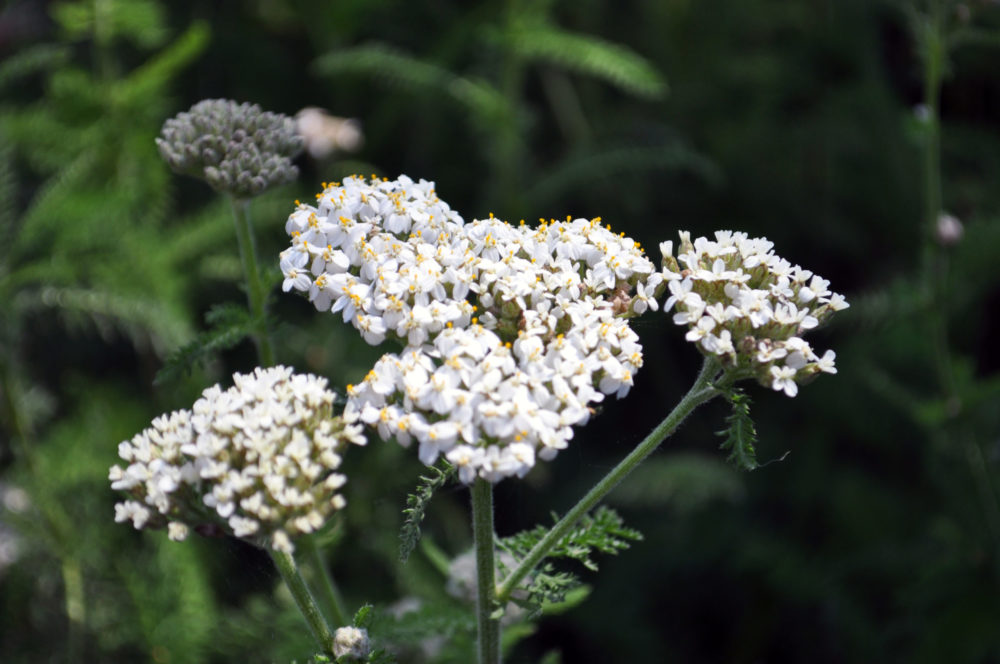 Common Yarrow (Achillea millefolium) | Yarrow has long been used as a medicine to treat toothaches, head colds, and to prevent infection. Yarrow is in the sunflower family, of which many members have composite flowers in the form of flower heads. From a distance these might seem like one flower, but they are in fact many flowers clustered together. 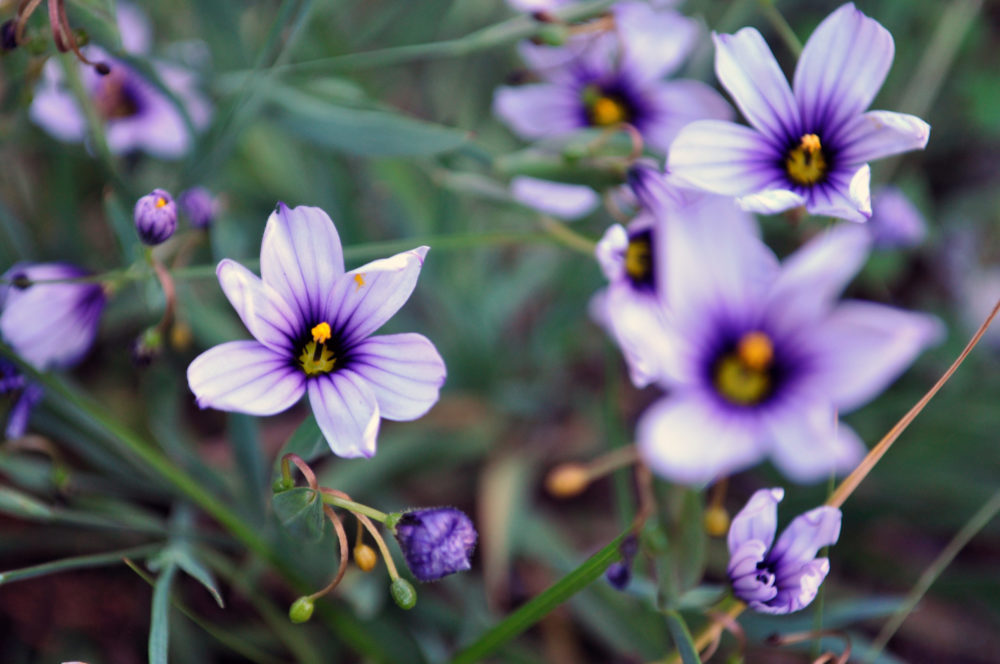 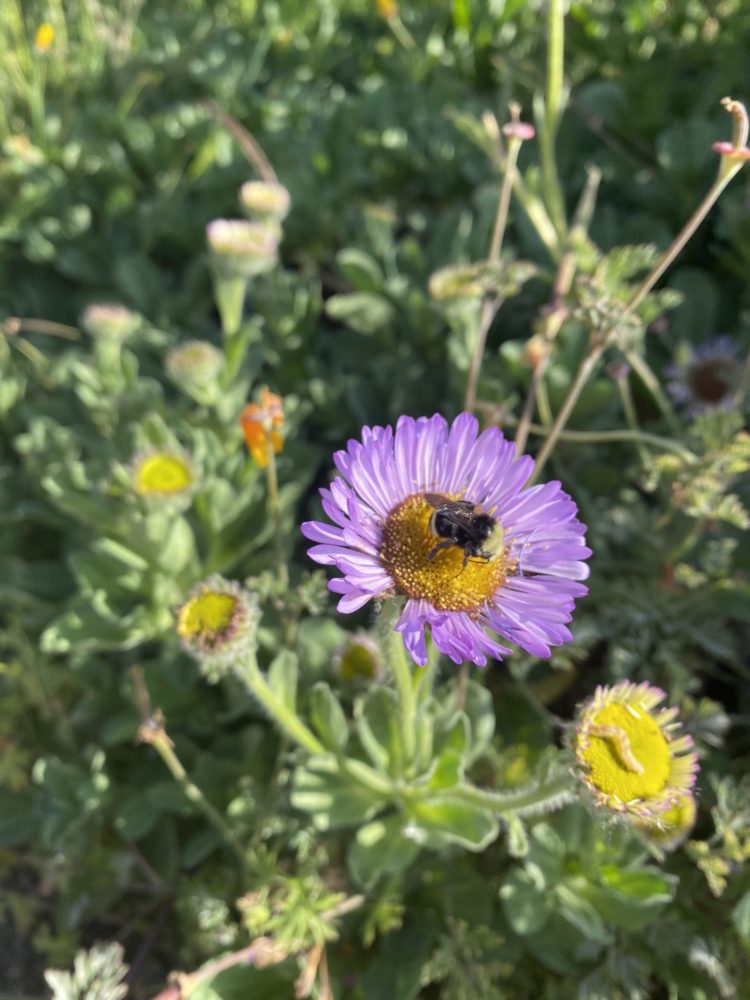 Seaside daisy (Erigeron glaucus) | These low-growing flowers can live for several years and grow well even in drought conditions, as well as tolerate high winds and salt spray. Seaside daisies can bloom up to 9 months of the year, making them an important nectar source for pollinators in the winter. 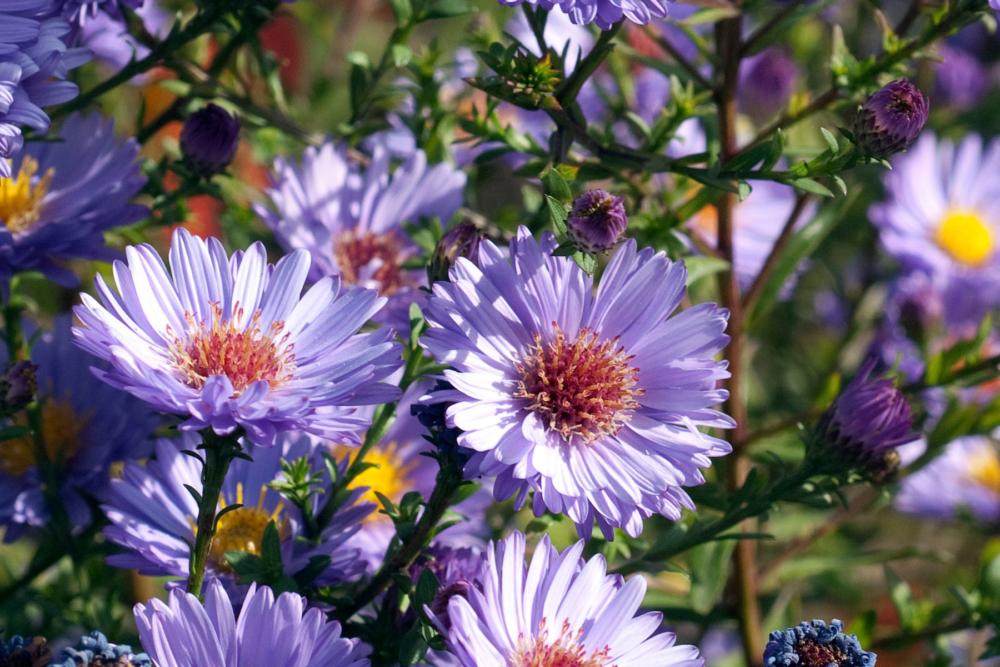 Pacific Aster (Symphyotrichum chilense) | These knee to waist-high flowers are an important late-summer nectar source, often blooming heavily from July through the fall when many other species have gone dormant for the season. Insects, butterflies, and bees often converge on pacific asters, finding refuge in the pink petals and leafy growth. 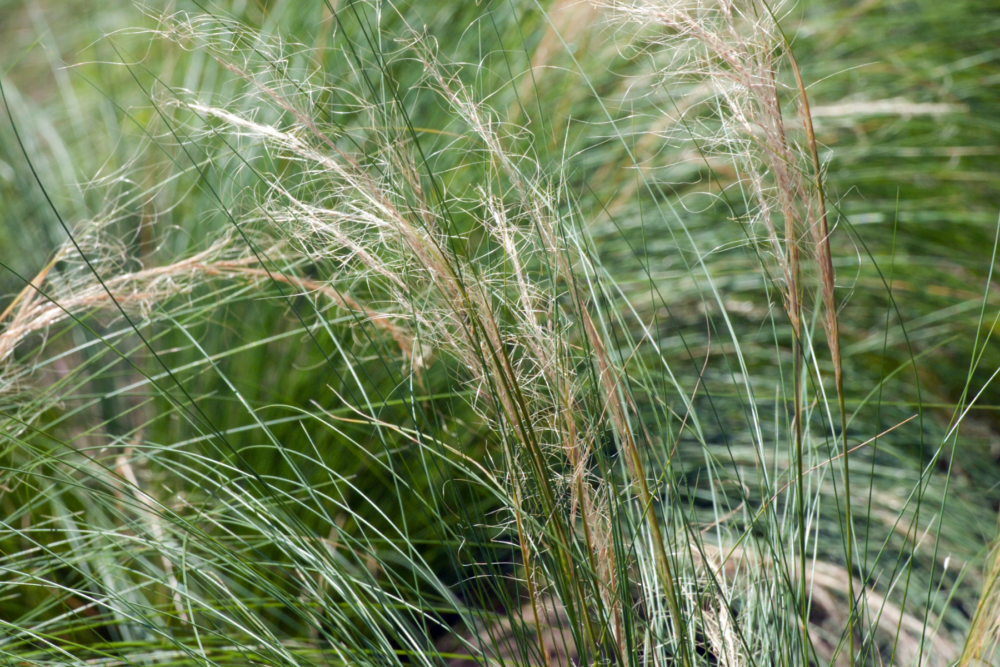 Tufted Hairgrass (Deschampsia cespitosa) | Tufted hairgrass grows in characteristic bunches. It has a deep root system that can draw on water deep underground, typical of native grasses. This keeps it green and succulent throughout the summer when it is grazed on by both cattle and deer where it is found in grasslands and wet meadows. 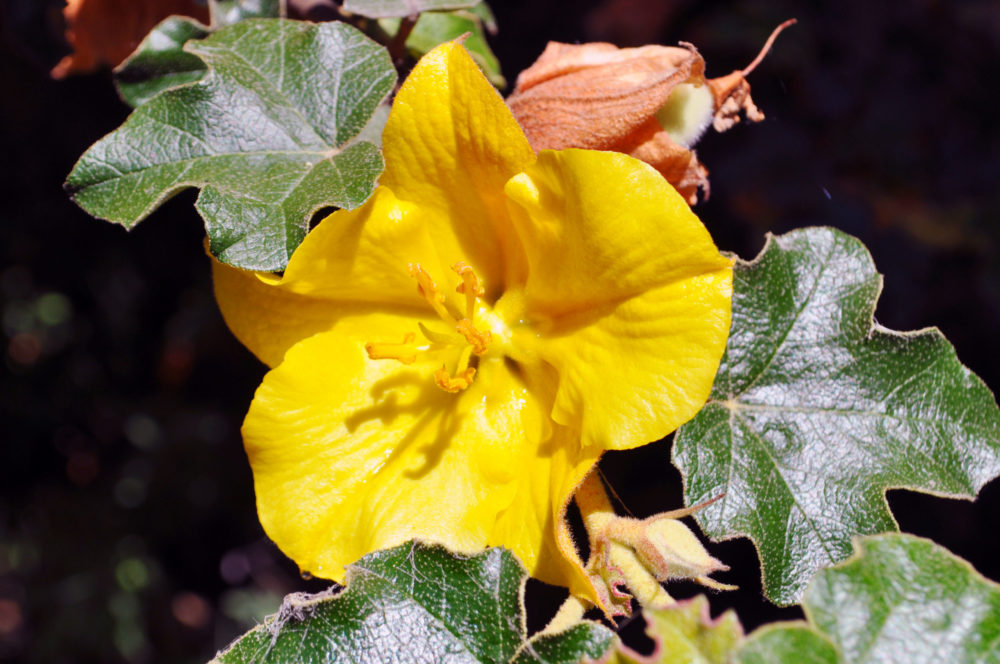 California Flannelbush (Fremontodendron californicum) | In the same plant family as chocolate, these showy, yellow-flowered shrubs bloom prolifically in spring in the drier regions of California, Arizona, and Baja. The leaves and thin branches are covered in a fine fuzz that can be quite irritating to the skin when touched. 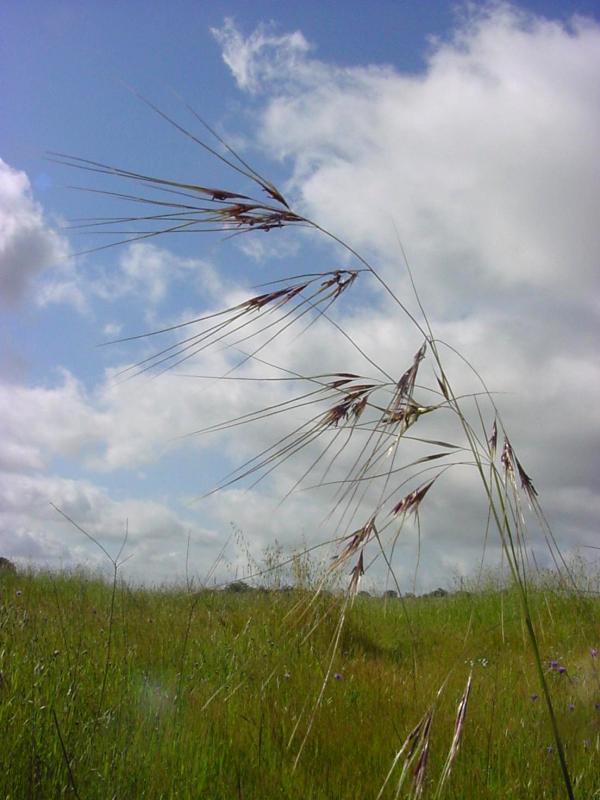 Purple Needle Grass (Stipa pulchra) | California’s state grass, this hearty plant can grow roots more than twenty feet deep, making it able to withstand more severe droughts and stay green long into the dry season. The seeds were traditionally harvested for food by Indigenous tribes all along the coast ranges and Central Valley. 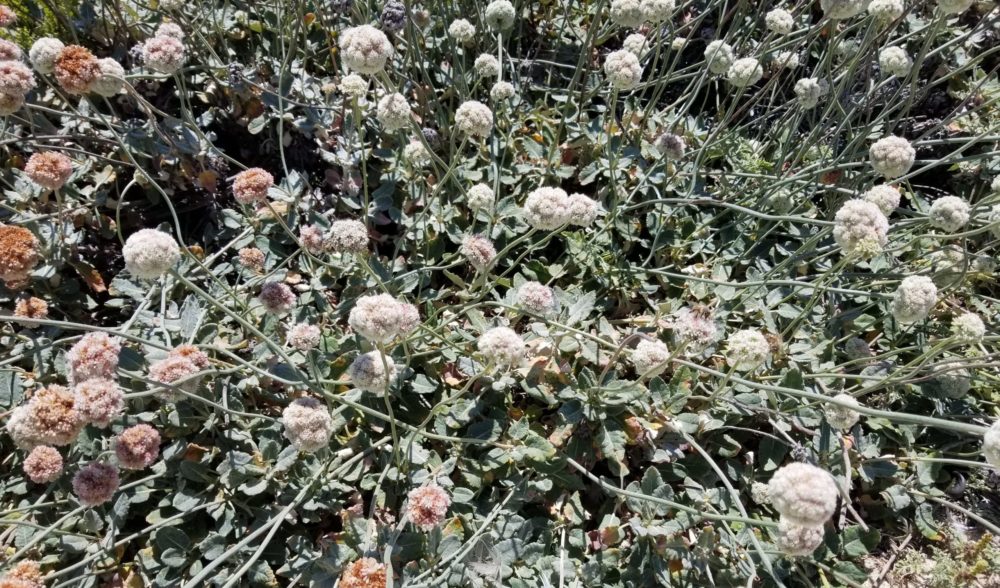 Seaside Buckwheat (Eriogonum latifolium) | Seaside Buckwheat grows alongside the coastline of California, often perched on cliffs right above the ocean, or in scrubby grasslands just inland. Buckwheat may grow in a variety of ways depending on where it’s found and how much wind it is exposed to, often growing quite flat across the ground. It is an important plant for a huge range of pollinators. 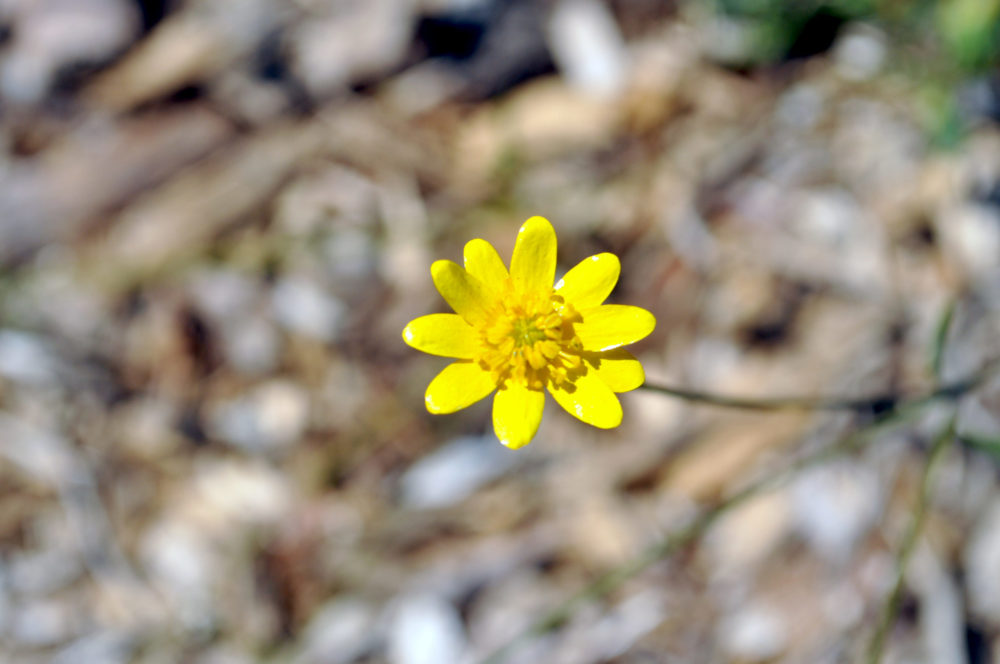 California Buttercup (Ranunculus californicus) | These bright, shiny yellow flowers often bloom earlier than many other species, and will go to seed and return to a dormant state by early summer. Buttercups can be a nice source of nutrition and can be toasted or ground up and added to baked goods.

Explore other resources for better understanding native plants, fungi and the many habitats of Santa Cruz County.

Shop in the Online Store

Get Involved with Native Plants

Volunteers of all ages are crucial to the care and maintenance of the Garden Learning Center. If you’d like to help keep this habitat thriving you can join us for monthly Saturdays in the Soil events.

See something in bloom or examples of wildlife while you’re exploring? Take a photo and tag us on social media!

Use the app iNaturalist to upload your observations in the garden. Figure out the identification of your specimen and contribute to community science at the same time.

Over the past decade, dedicated volunteers and staff have developed our Garden Learning Center into a mosaic of native habitats. The original garden was planted in 2008 and in 2017 we installed the front coastal terrace habitat in partnership with the City of Santa Cruz, Groundswell Coastal Ecology, and local school groups. The Garden Learning Center was made possible through the generous support of these groups: