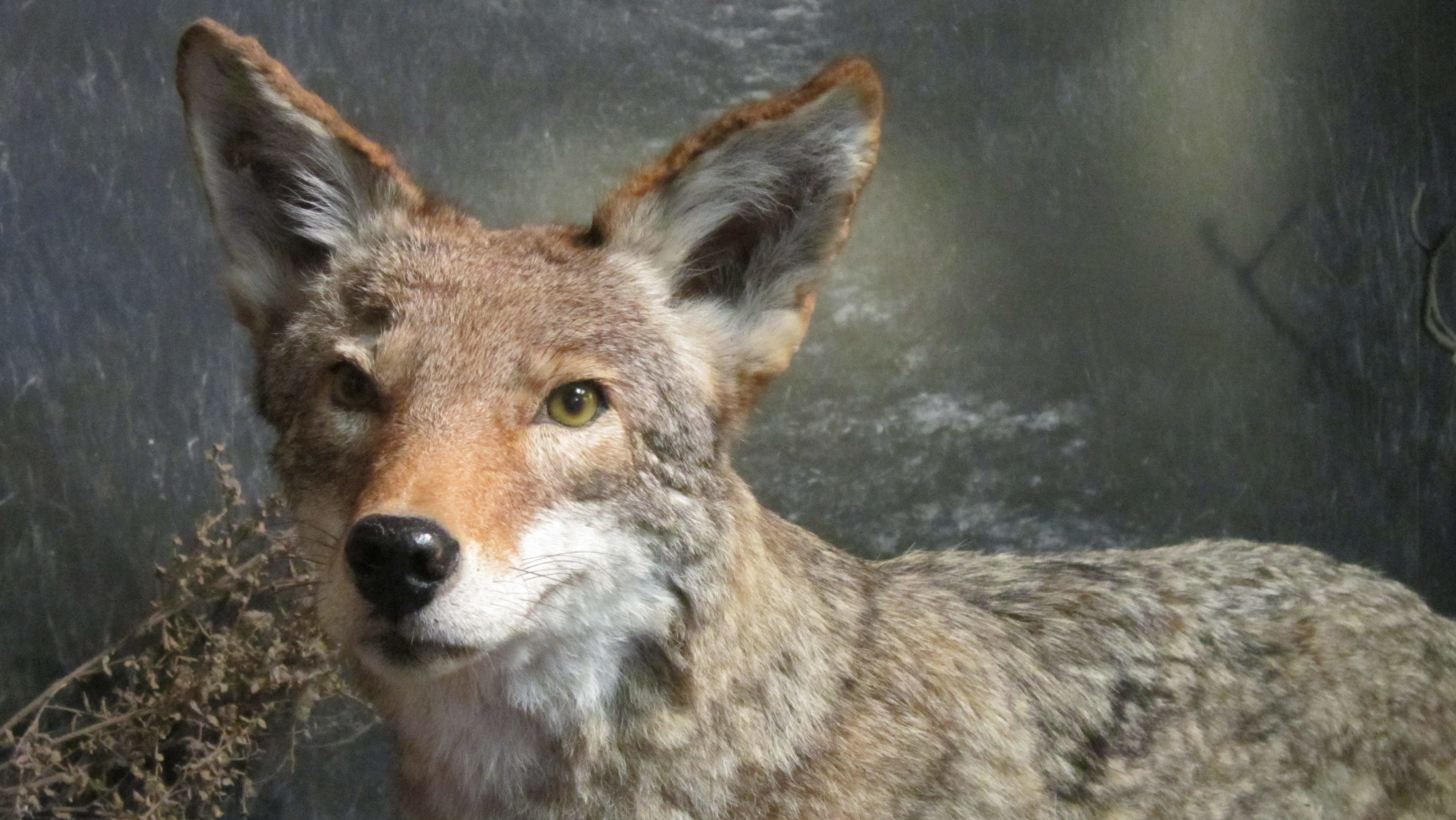 Coyotes are widely known as clever animals. Commonly heard, less commonly seen, and rarely surprised, coyotes are able to survive in all kinds of habitats thanks to their ability to eat lots of different foods.

Explore a coyote skull and learn about how these tricky creatures are able to adapt to eating different foods, and how teeth and skeletons can tell us a lot about how an animal survives! 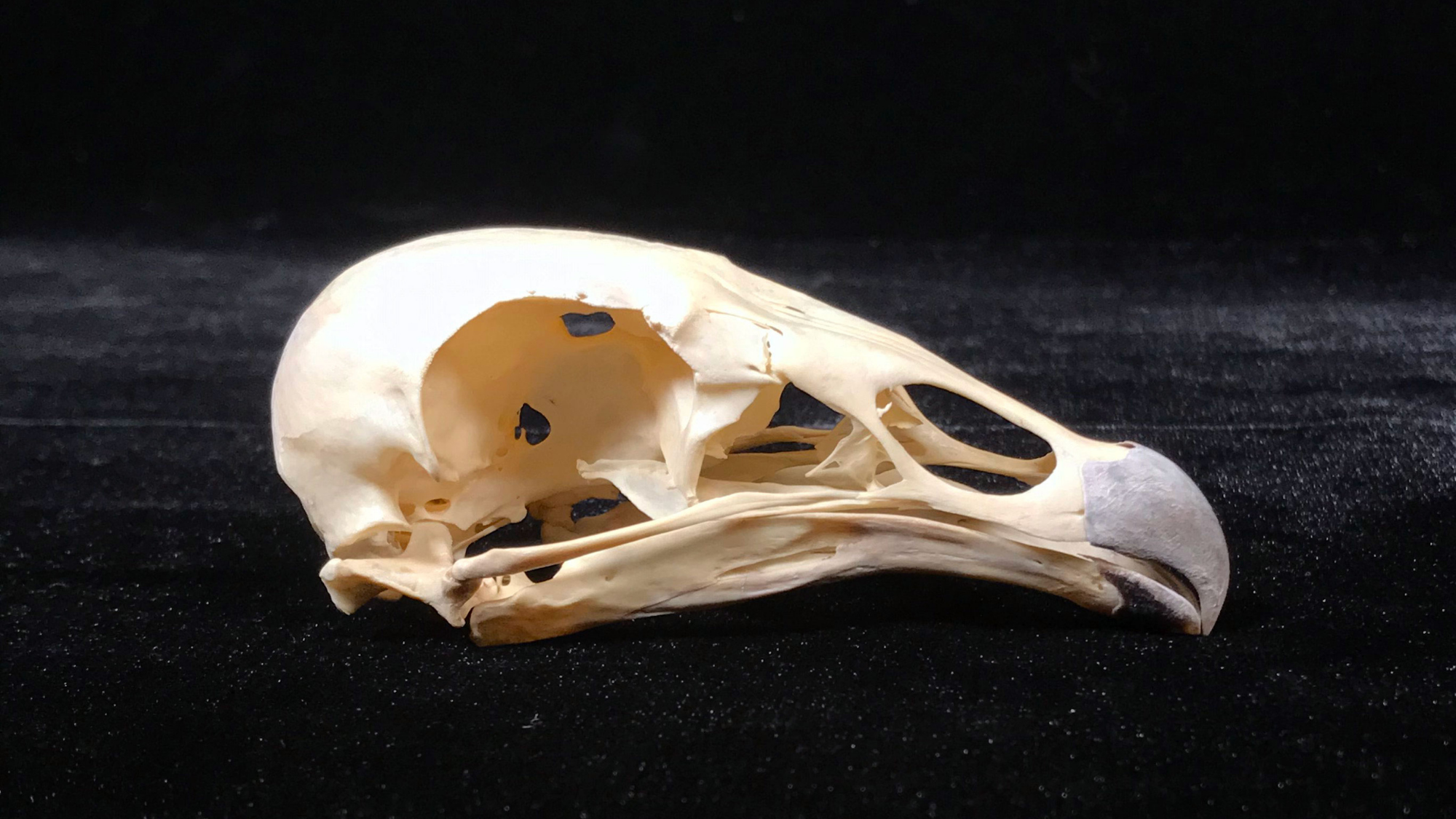 This month’s Collections Close Up stares out at us from the intersection of spooky, stunning, and scientific – of storytelling with skulls. To set the scene, we introduce a newer member of the Museum’s collection – the skull of a turkey vulture (Cathartes aura), part of a complete skeleton given to the museum from the collection of Ray Bandar.

It’s also this very behavior that has inspired the term vulture culture – an evolving subculture of people who are captivated by the artistic allure of body parts of dead animals. Of course, there’s more to a skull then how nicely it would cover part of your wall. From a science education perspective, skulls tell stories of the adaptations that animals use to survive in the world around them. For example, here we note a strong, sharp beak for tearing meat from bones rather than sipping nectar from flowers or straining food from water. Researchers dig deeper into the morphology, or structures of skulls, looking at hundreds of individuals bones to build our understanding of animals’ lives.

Collector Ray Bandar, was no stranger to balancing a morbid fascination of skeletons with their scientific and educational value. So driven by his passion to study nature’s “sculptures”, the humble Bay Area high school teacher spent 60 years as a field associate for the California Academy of Sciences (CAS). While his collection contained everything from birds to bears, his particular speciality was marine mammal skulls. Working in collaboration with Academy scientists and the West Coast Marine Mammal Stranding Network efforts, Bandar spent decades oncall for collecting trips from Bodega Bay to Año Nuevo.

Day or night, whenever the calls came, the first part of the process for deceased animals was also the most important: collecting the data. Information such as the location, species, sex, size, apparent cause of death are critical for a specimen’s contribution to science. He would often participate in the entire messy, squishy and smelly process of taking these animals from “From Death to Display”.

Skulls are collected because they are information-rich – scientists can learn a lot from the wear on the teeth to the size of the brain case and more. They are also expedient – it is easier to store the skull of a whale than an entire individual. Nonetheless, in rare or scientifically valuable cases, like Orca O319 – scientists may take the whole animal.

Whether whole or in pieces, Bandar contributed thousands of specimens to Cal Academy’s collections, particularly California sea lion skulls. Collected under CAS permits, many of the specimens were stored in his home, or “Bone Palace”. A stunning take on the palatial, specimen rich displays of natural history collections throughout time, Bandar’s labor of love inspired numerous articles and even a documentary or two.

Never the shy collector, Ray was also a constant public fixture at the Academy. He designed exhibits, wrote labels and staffed events, particularly around Halloween. Today, elements of his collection are still on display, supporting the CAS’s stories of skulls.

After Ray’s death in 2017, well documented members of his skeletal menagerie were relocated to Academy collections storage. The folks at the Academy generously shared the remaining wealth of Bandar’s kingdom with science education organizations – including your local natural history museum. Thrilled to take part in the rich legacy of “Bones” Bandar, Museum staff collaborated to select a set of specimens to flesh out the gaps in our collection, focusing on enhancing our capacity to engage visitors with the striking elements of the natural world.

And that has been the case for this turkey vulture skull – whose first public debut was as a creepy carrion eater with an ecological heart of gold for 2019’s “The Birds” themed Museum of the Macabre. Other Bandar specimens, including a second turkey vulture skull, showcased biodiversity – enriching our “exploded bird” exhibit case.

Macabre has traditionally been our evening of curiosities, creatures, and cocktails – where we dig into the seemingly strange or ostensibly awful elements of the natural world to create space for different kinds of connections. Join us this year for online events, whether for creepy caves, macabre mushrooms, taxidermy tips or a deeper dive into cabinets of curiosities and their relationship to modern museums.

There’s a mystery that we need to solve. What do these animals eat? Observe three different native animal skulls and learn about different types of teeth to solve this mystery!

This activity was adapted from the Our Animal Neighbors Program for distance learning and is for 2nd and 3rd graders. It can be used with younger grades, but students may need assistance with reading.