In this edition of Rock Record, the Geology Gents unearth a few key examples of how newly exposed outcrops have led to important geological insights, as well as some geologic exploration into freshly exposed rock and sediments exposed by the CZU Lightning Complex Fires.

By Graham Edwards and Gavin Piccione (aka the Geology Gents)

To reconstruct Earth history, geologists rely on the rock record: the accumulated rocks that, through their accumulation and formation, are relics of ancient geologic processes spanning geologic history. Such rocks provide a spyglass with which to peer into geologic history. But our view through this spyglass is limited to rocks that are both exposed at the Earth’s surface and have survived the effects of erosion.

As geologists, we often rely on Earth processes to expose new rocks and provide us fresh glimpses into Earth’s history. Since exposing fresh rock requires a lot of energy, natural disasters or extreme natural events can expose clues to this history through fresh rock surfaces. Human activities, such as construction or mining, can also expose new geological wonders.

In this edition of Rock Record, we’ll go through a few key examples of how newly exposed outcrops have led to important geological insights, as well as some geologic exploration into some freshly exposed rock and sediments exposed by the CZU Complex Fire.

The construction of roads often requires the removal of large sections of rock, leaving sheer rock faces on the sides of the road. Some of the most famous rock outcrops are ones exposed in roadcuts and these unique locations are a frequent destination for college geology classes.

As undergraduates, the Gents (i.e. Gavin and Graham) explored roadcuts in the Northeastern US, and learned about tectonic motion through the faults and folds exposed in roadcuts (like the one in the image to the right), about metamorphic rocks via roadcuts in Maine, and about large deep-sea sediment avalanches (called turbidites) from roadcuts in upstate New York. Rocks exposed on the sides of roads can also be significant for geologist’s understanding of the sequence of events in an area.

For instance, a roadcut in Owens valley (see image below), settled a longstanding debate amongst geologists about whether the Bishop Tuff was deposited before or after the first glaciations in the area. The exposed rock showed the Bishop Tuff sitting on top of the Sherwin Till glacial deposit, meaning that the tuff must have been deposited after the till.

Forest fires are, in many cases, an important natural event for the health of a forest because they clear the forest floor of brush and dead vegetation. Through this process, fires also expose large portions of rock that would otherwise not be visible. For this addition of Rock Record, the Gents explored some areas of the Santa Cruz mountains that have been burned in the CZU Lightning Complex fires last August.

Taking Empire Grade North, areas of Cretaceous (145-66 million years before present) igneous and metamorphic rocks that were previously covered by vegetation are exposed in the burn zone of the recent fires.

Sometimes extreme weather events can expose new outcrops or geologic features. For instance, the Frijoles Fault of a previous Rock Record post, The Faults that Shape Santa Cruz, was hidden behind trees and shrubs until a powerful storm event in the 1970s drove enough coastal erosion to expose the fault in the sea cliffs. Even more recently, heavy rains can cause landslides on the steep topography of the Santa Cruz Mountains and Santa Lucia Mountains of Big Sur. Each of these landslides exposes new surfaces that allow geologists and geomorphologists to study what causes landslides and the ways that massive amounts of Earth can be rapidly moved down hillslopes.

Some rocks are truly out of this world! Rocks that formed beyond Earth and arrive on Earth are called meteorites. Most meteorites come from the asteroid belt, a ring of rocky debris that dwells between the orbits of Mars and Jupiter, while some meteorites come from Mars and the Moon. As any Earth dweller knows, meteorites are incredibly rare, but they are important samples of other celestial bodies and leftovers from planet formation that we can study in close detail here on Earth. So, a meteorite fall is an incredibly exciting event for planetary scientists and geologists, alike!

One of the most important meteorites ever to land on Earth was the Allende meteorite, which landed in 1969 near the town of Pueblito de Allende in the state of Chihuahua in northern Mexico. The stone broke into pieces before it landed on Earth, but the collected chunks of this meteorite total >4,000 pounds with more pieces still found today! Because there was so much meteorite to go around, many scientists have studied it, and since the Allende meteorite is made of some of the most ancient material in our solar system it has provided an invaluable window into the earliest moments of our solar system just after the Sun formed!

What mysteries do you suppose are hiding all around you, covered by trees, houses, or soil?

As mushroom hunters, we enjoy traveling far and wide, bouncing from place to place and following the rains to stay with the season. But what happens when we focus on revisiting the same small areas whether there has been rain or not? And what if we take it a step further, and rather than just harvesting chanterelles or photographing the flashiest species, we take the time to pay attention to everything, counting individual fruitbodies and keeping track of changes from year to to year?

Christian Schwarz has been undertaking just such an effort for the past three years, supported by a grant from the Save the Redwoods League, and this year, some of his survey transects were burned in the CZU Lightning Complex fires. Join the Kenneth S. Norris Center for Natural History, the San Lorenzo Valley Museum, and the Santa Cruz Museum of Natural History to hear what discoveries, lessons, and patterns have emerged from this ambitious project.

Watch past presentations from Christian:
Data is Not the Destination
Macabre Mushrooms: Ghouls of the Woods

Christian Schwarz is a naturalist currently living in Santa Cruz, the land of milk (caps) and honey (mushrooms). He studied Ecology and Evolution at UCSC, and now spends his time photographing, teaching about, collecting, and researching macrofungi. He is coauthor of Mushrooms of the Redwood Coast. Fungi satisfy his curiosity with their seemingly endless forms – from the grotesque to the bizarre to the sublimely beautiful. Besides dabbling in mushroom taxonomy, he loves fish, plants, nudibranchs, moths, and dragonflies. He is passionate about citizen science, especially iNaturalist.

This program is part of a series in support of the exhibit Look. Act. Inspire. and is presented in partnership between 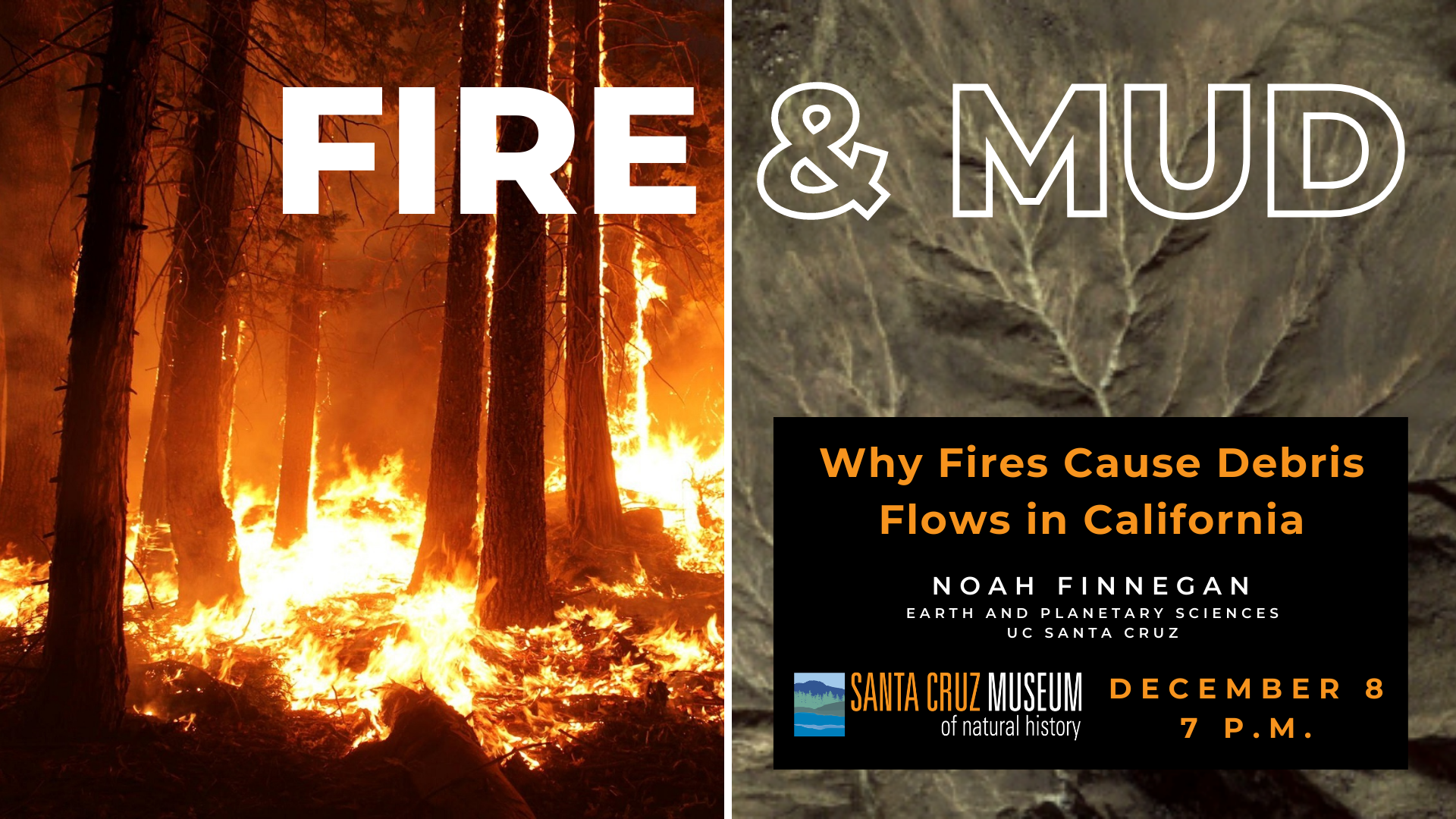 Geomorphologist Noah Finnegan provides an overview of the science linking wildfires and debris flows in California, including lessons learned from the 2009 Lockheed Fire in the Santa Cruz mountains. Particular emphasis is paid to how residents impacted by the CZU Lightning Complex can navigate resources to better understand their debris-flow risks.

Below are resources referred to in the presentation and major take-aways from Noah Finnegan:

Noah Finnegan is a professor in Earth and Planetary Sciences at UC Santa Cruz. Noah’s research and teaching are focused on processes of erosion and sediment transport on hill slopes and in river channels. California’s Coastal Prairies are a rare and incredibly biodiverse habitat found in Santa Cruz, and the most species-rich grassland type in North America. Despite its rarity and species-richness, this is a habitat-type at risk of continued range loss due to development, fire suppression, invasive plants, and other factors. During this interactive class we will explore these threats to this habitat type, as well as what makes coastal prairies unique, including the geology of coastal terraces, notable species, and ecological factors that have impacted the habitat type over millennia, including cultural burning by indigenous communities.

We are also excited to have a special guest join us this time! Justin Luong is a Ph.D. researcher in Environmental Studies at UC Santa Cruz, currently focused on grassland restoration in California, and will share his research regarding potential impacts on coastal prairies due to climate change and drought.

About the series: Join fellow nature enthusiasts for monthly explorations of the biodiversity of Santa Cruz County. Each month, our Public Programs Manager Marisa Gomez will share the stories of a specific Santa Cruz habitat as we develop our skills as naturalists.

This series will feature a presentation as well as an interactive session and is in partnership with Santa Cruz Public Libraries. Come prepared to share and to learn alongside naturalists deep in their journey and just starting out. 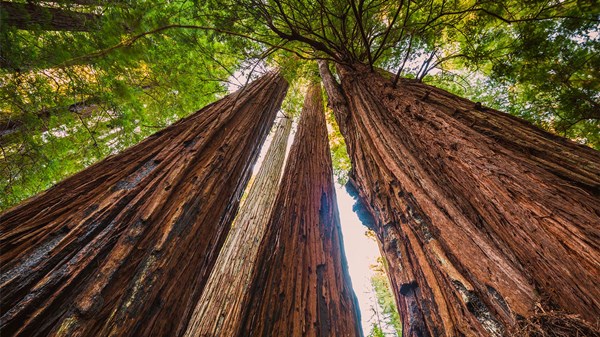 Redwoods are the tallest trees on earth, with lifespans that reach into the thousands, but their range is relatively small. A combination of longitude, climate, and elevation limit where they grow to a few hundred coastal miles — including right here in Santa Cruz. Explore the many compelling physical attributes of these towering giants, how humans have impacted their limited range, and the role that fire plays in their ecological story during this interactive class.

About the series: Join fellow nature enthusiasts for monthly explorations of the biodiversity of Santa Cruz County. Each month, our Public Programs Manager Marisa Gomez will share the stories of a specific Santa Cruz habitat as we develop our skills as naturalists.

This series will feature a presentation as well as an interactive session and is in partnership with Santa Cruz Public Libraries. Come prepared to share and to learn alongside naturalists deep in their journey and just starting out. 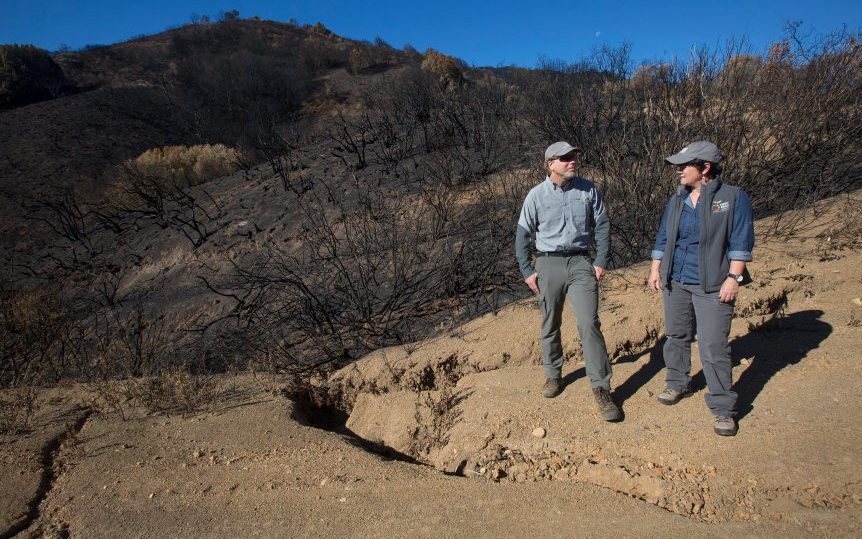 This month, the Geology Gents are joined by their colleague Alandra Lopez, a Ph.D. candidate in the Earth System Science Department at Stanford University who will discuss the impacts of fire on geologic systems, as well as spend some time on one of our state’s unique features: serpentine soils.

Alandra studies the biogeochemical processes that control the release of naturally occurring contaminants, like arsenic, uranium, and hexavalent chromium, in soils to groundwater.

About the Series: Join the Geology Gents, Gavin and Graham, for monthly conversations about rocks live on Facebook. Each week we’ll explore a different geologic topic, from Santa Cruz formations to tips for being a more effective rockhound. Graham Edwards and Gavin Piccione are PhD candidates in geochronology with the Department of Earth and Planetary Sciences at UC Santa Cruz.

Submit your questions ahead of time here or by email to events@santacruzmuseum.org and feel free to include pictures of rocks you’d like identified! Pro-tip: the better the picture, the better the ID.