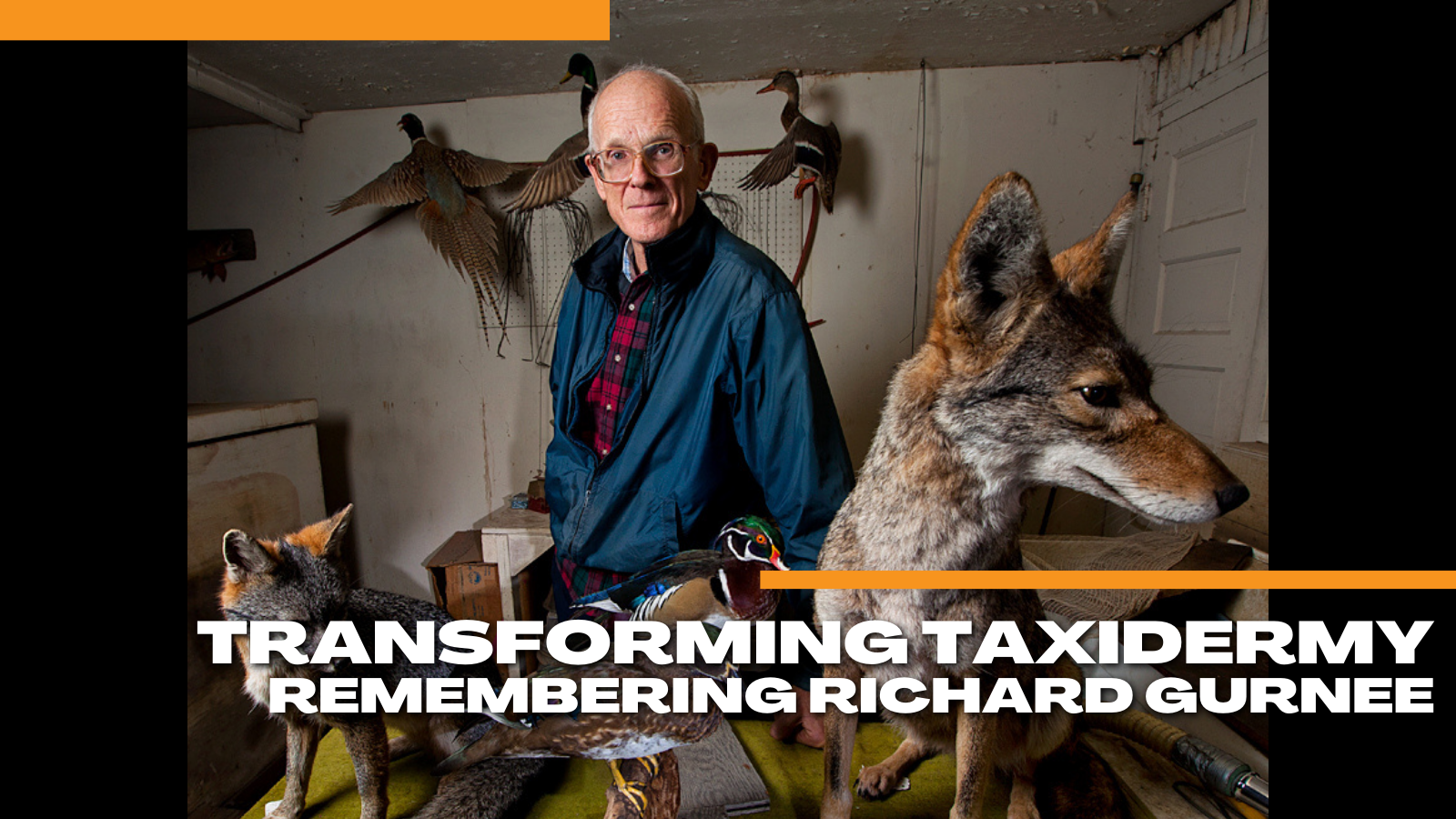 Watsonville native Richard Gurnee pioneered a freeze-drying technique that revolutionized the field of scientific taxidermy. Though he passed away in late 2022, his legacy will live on through the many organizations that share his specimens with the community through nature centers, museums, and educational programs. 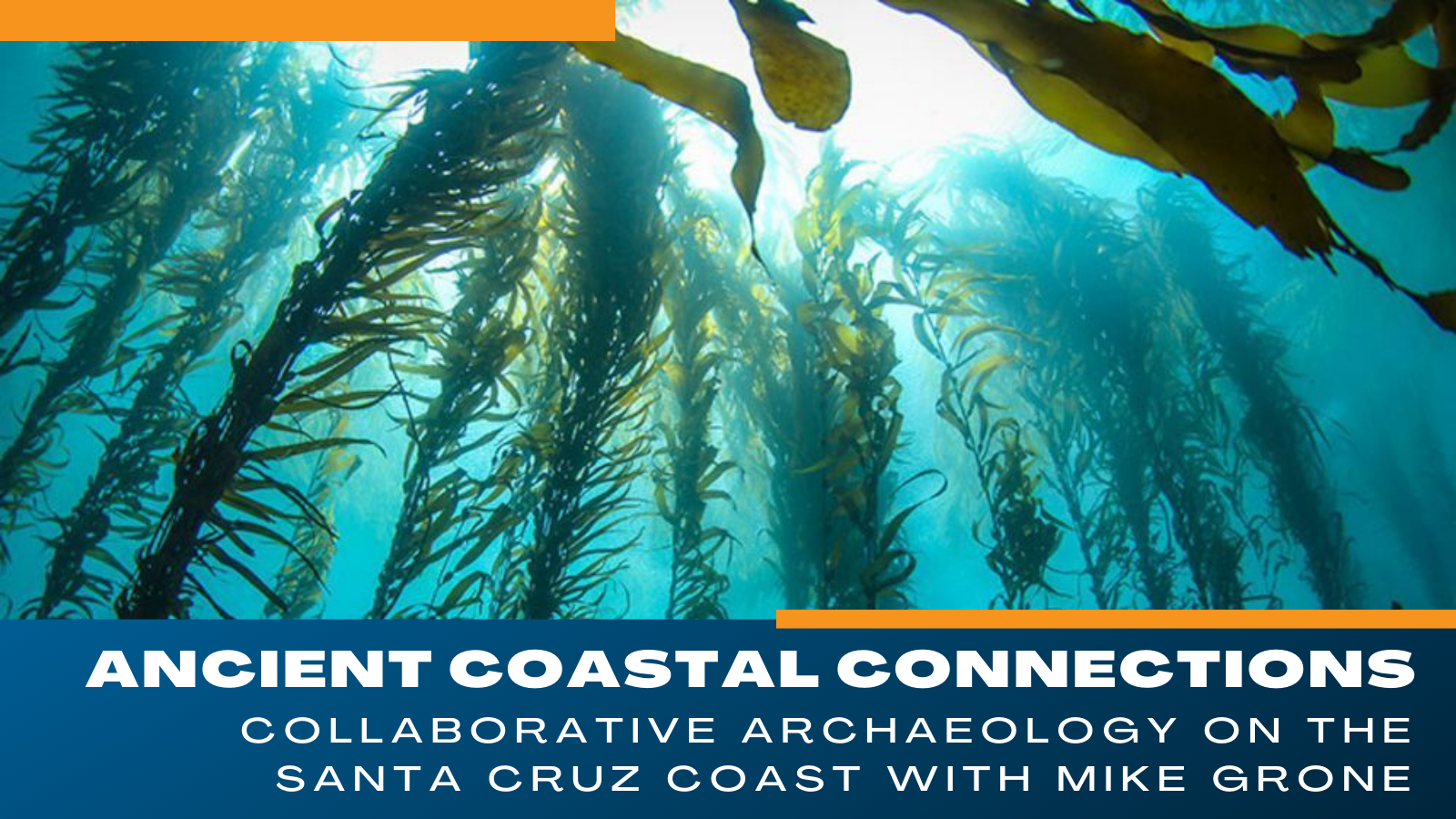 Indigenous communities have had relationships with local marine resources for millennia, and science can help shed light on these relationships. Join archaeologist Mike Grone for a discussion about collaborative historical ecology research carried out over the past decade in partnership with the Amah Mutsun Tribal Band, UC Berkeley, UC Santa Cruz, and the Santa Cruz District of California State Parks.

This program will emphasize the application of archaeological data for revitalizing and restoring traditional ecological knowledge suppressed during the mission period, as well as for providing deep time baselines of environmental change and more sustainable approaches for contemporary stewardship practices.

Dr. Mike Grone is the Associate State Archaeologist for the Santa Cruz District of California Parks and Recreation. Prior to working for Parks he worked for the Amah Mutsun Land Trust as a manager of their Coastal Stewardship Program and Archaeological Resource Management Program. His research focuses on the historical ecology of coastal resources in the northern Monterey Bay Area and is ultimately geared towards integrating archaeological data and traditional ecological knowledge to guide policy, conservation efforts, and resource management practices. 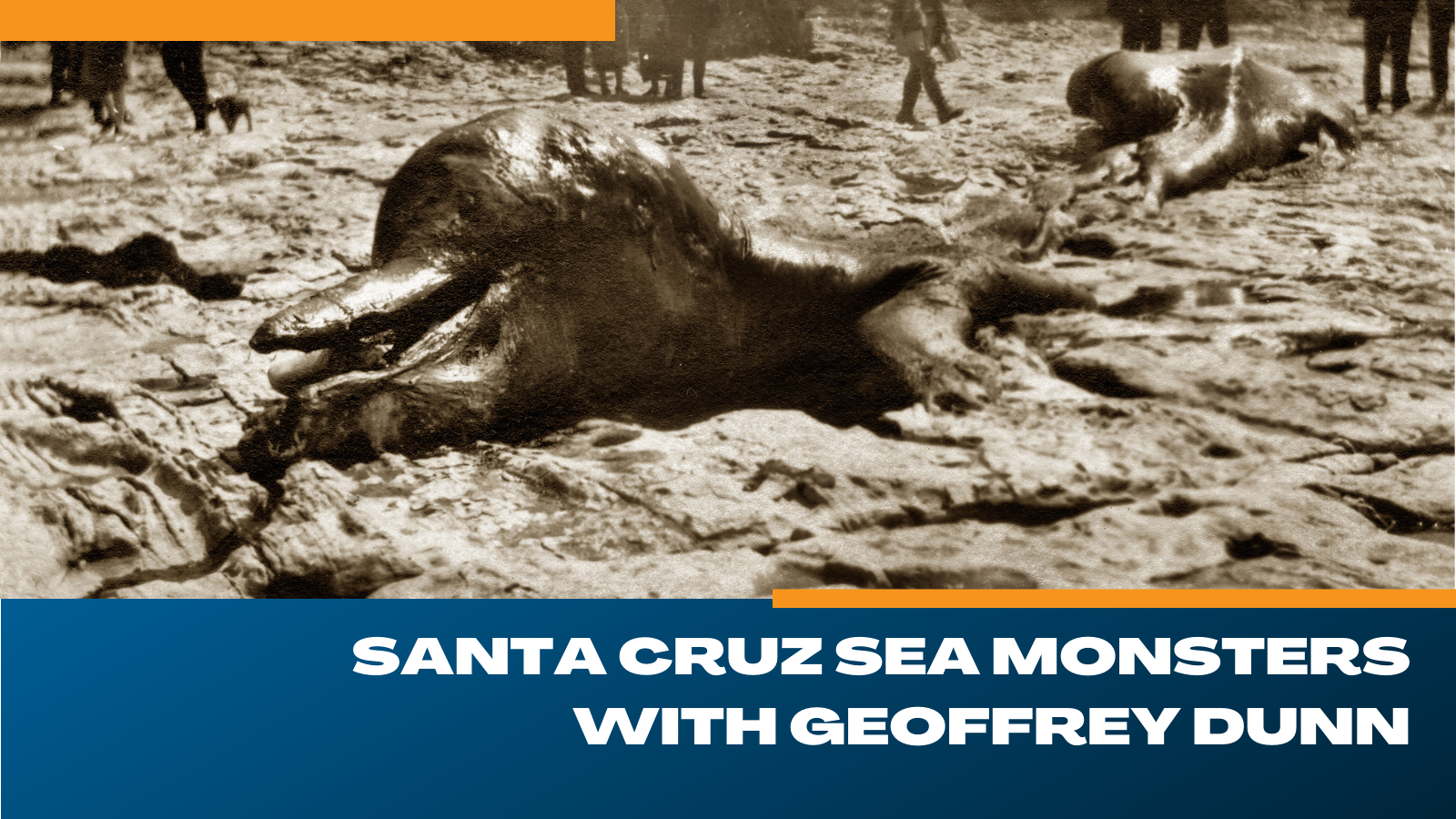 Santa Cruz has a long history of fishing lore, including the legend of the “Old Man of the Monterey Bay.” Geoffrey Dunn is a fourth-generation member of the Santa Cruz Italian fishing colony who grew up with stories about the “Old Man” and sea monsters as a boy, which has influenced his work as journalist, filmmaker, and historian. Join us for the online talk exploring local myths and legends in honor of the exhibit, Maritime Mysteries and Monsters.

Geoffrey Dunn, Ph. D., is an award-winning journalist, filmmaker and historian and has written extensively about California culture and history. He is the author of several books, including Santa Cruz Is in the Heart (Volumes I and II); The Santa Cruz Wharf: Images of America; Chinatown Dreams: The Life and Photography of George Lee;  and The Lies of Sarah Palin. His films include Dollar a Day, 10¢ a Dance: A Historic Portrait of Filipino Farm Workers in America; Chinese Gold: The Chinese of the Monterey Bay Region;, Calypso Dreams, and The Glamour Boyz Again. He also served as the on-screen narrator of A Day on the Bay: Portrait of a Ligurian Fishing Colony. Dunn has been writing about Monterey Bay’s maritime history for more than four decades. 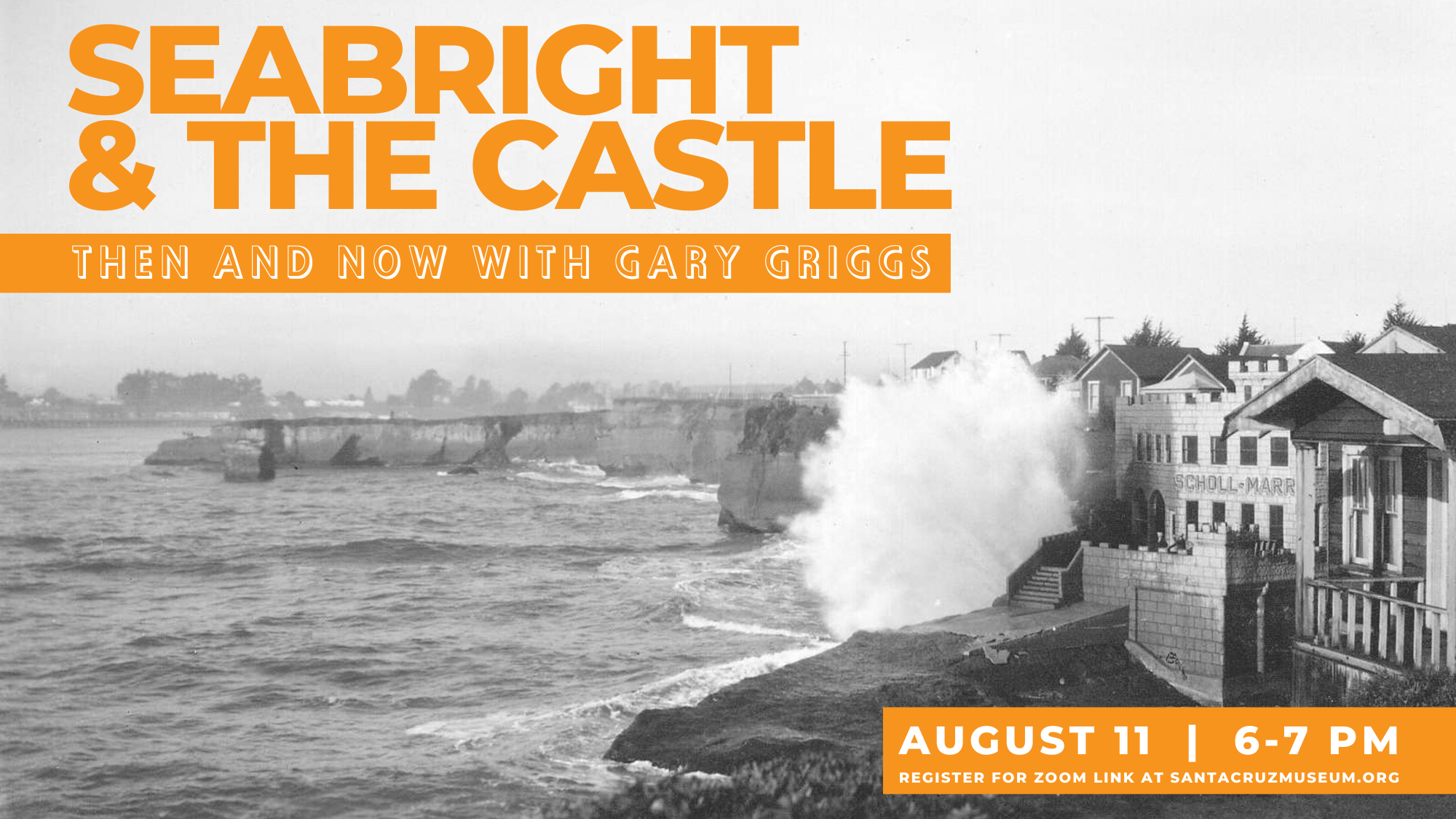 Santa Cruz’s scenic coastline has long enthralled residents and visitors alike, yet storms, relentless waves, and human impacts have and will continue to change our coastline. Join Dr. Gary Griggs for an examination of these processes through the lens of one of Santa Cruz’s most iconic beaches.

This program is in support of our latest exhibit Remembering Castle Beach.

More About the Talk

Castle (or Seabright) Beach went from being a very narrow seasonal beach to the one of the widest in the county following the construction of the Santa Cruz Small Craft Harbor. Seabright has long been a unique neighborhood with a character that has survived for well over a century. It was considered to be out in the country by Santa Cruz standards when it was first developed as a seaside resort in the 1880s. For years a rather makeshift footbridge over the San Lorenzo River was the main route into town. Each winter it had to be removed to keep the river from washing it away, and Seabright residents had to walk across the railroad bridge, considered dangerous at the time as there was no pedestrian walk as there is today.

Gary Griggs is a Distinguished Professor of Earth & Planetary Sciences at the University of California Santa Cruz, where he has taught for 54 years. He received his B.A. in Geological Sciences in 1965 from the University of California Santa Barbara and a Ph.D. in Oceanography from Oregon State University in 1968. Gary served as the Director of the University’s Institute of Marine Sciences for 26 years, where he led the development of a Coastal Science Campus. His research, teaching, writing and lectures have been focused on the coast of California and include coastal processes, hazards, and the impacts of and responses to sea-level rise. In 1998 he was given the Outstanding Physical and Biological Sciences Faculty Award at U.C. Santa Cruz, and the Alumni Association honored him with a Distinguished Teaching Award in 2006. The California Coastal Commission and Sunset Magazine named him one of California’s Coastal Heroes in 2009, and in 2010 he was elected to the California Academy of Sciences. Gary chaired a committee in 2017 recommended by Governor Brown to update California’s sea-level rise projections. In 2016 he was appointed to the California Ocean Science Trust. Gary is also a member of the California Ocean Protection Council’s Science Advisory Team and served as chair of California’s 4th Climate Assessment Committee on Coasts and Ocean.

Gary has written 13 books including: Living with the Changing California Coast, Introduction to California’s Beaches and Coast, The California Coast from the Air, Coasts in Crisis – A Global Challenge, The Edge – The Pressured Past and Precarious Future of California’s Coast, Between Paradise and Peril – The Natural Disaster History of the Monterey Bay Region, and most recently The Ominous Ocean: Rogue Waves, Rip Currents and other Dangers along the Shoreline and at Sea. 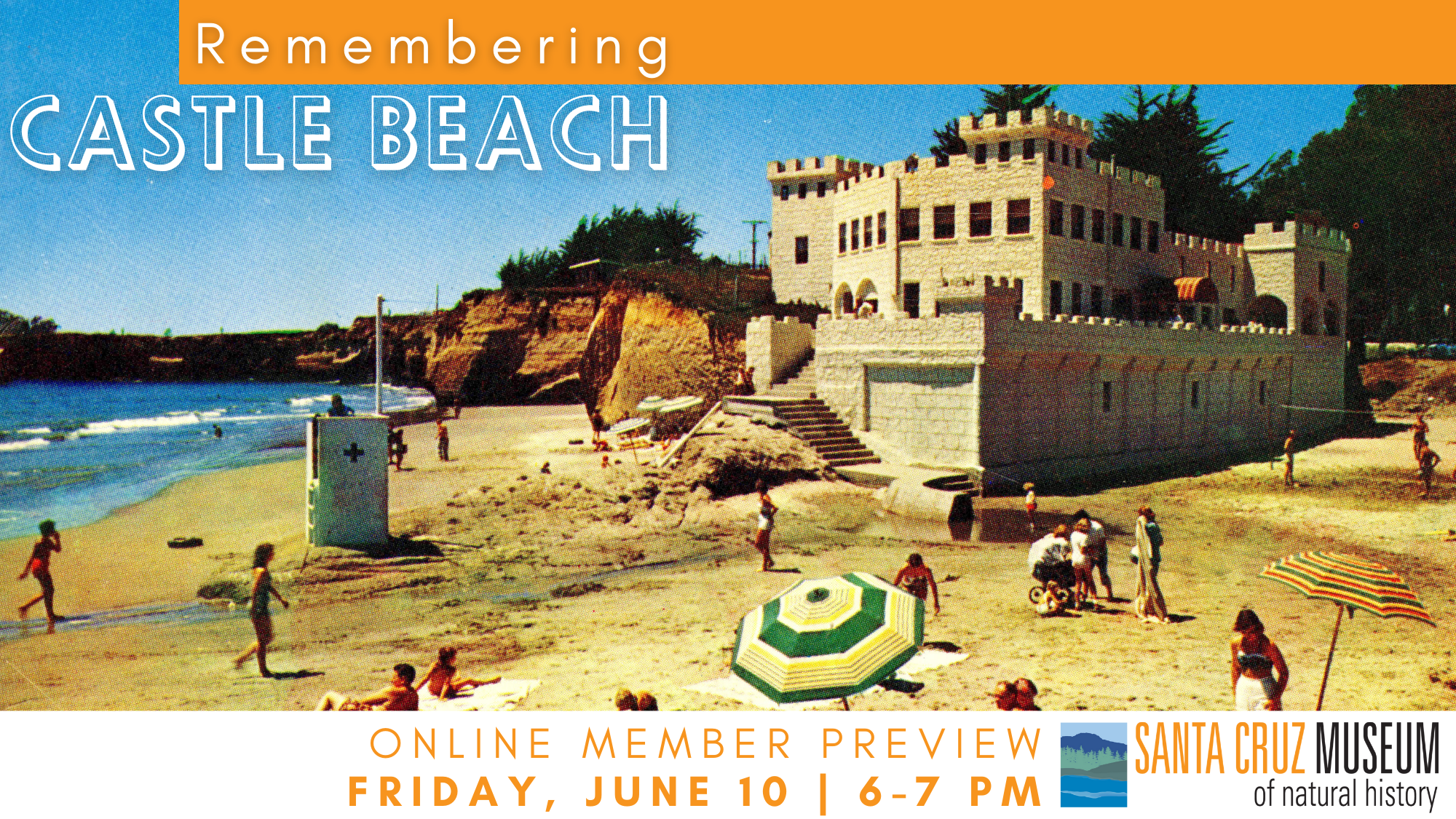 Stroll back in time as you explore the history of Seabright Beach, once called Castle Beach, during this online exhibit preview for Museum Members in honor of the new exhibit, Remembering Castle Beach, opening June 11, 2022.

Executive Director Felicia Van Stolk and Collections Manager Kathleen Aston will take Members behind the scenes of the exhibit, sharing additional stories and a deeper look into the historic photographs, souvenirs, and artifacts that bring to life the heyday of the Scholl Marr Castle and look at how the nearby coastline has changed over time. 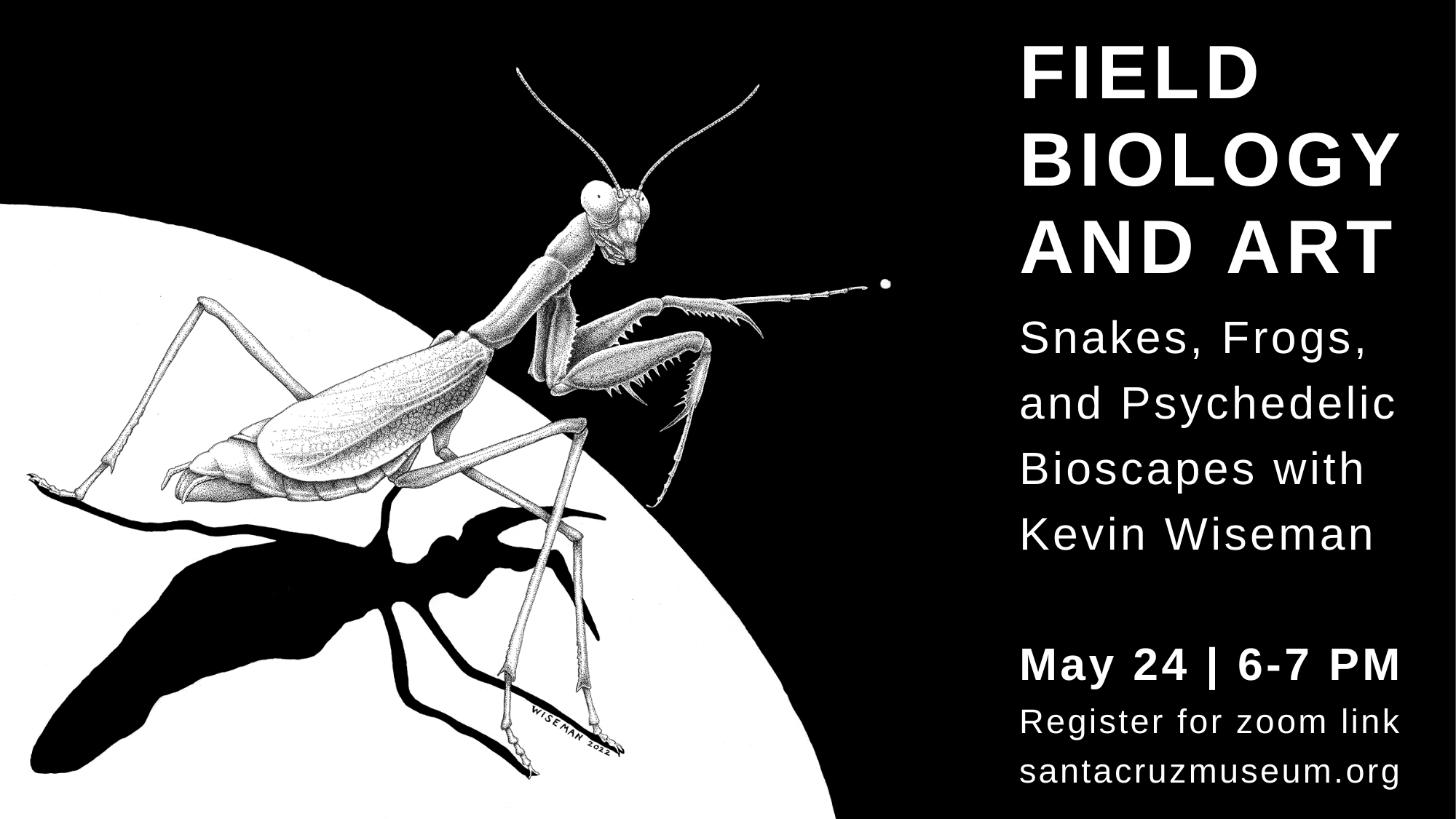 Science and art have a very old and interesting relationship, with each informing and inspiring the other. In this talk, Kevin Wiseman, featured artist in 2022’s The Art of Nature exhibit, will share his early inspirations, decades-long studies on snakes and frogs, scientific illustrations, and how a meeting with a Shuar shaman inspired a deep reflection on fossil fuels and climate change.

Kevin Wiseman is a professional herpetologist and artist and grew up in the Bay Area. He worked as a scientific illustrator at the Essig Museum of Entomology at U.C. Berkeley, where he got his undergraduate degree in Integrative Biology with the Museum of Vertebrate Zoology. He worked for many years at the Department of Herpetology at the California Academy of Sciences where he is currently a Field Associate. Mr. Wiseman has spent over 20 years conducting research on Foothill Yellow-legged Frogs (Rana boylii), California Kingsnakes (Lampropeltis getula californiae), and Sierra Gartersnakes (Thamnophis couchii). Mr. Wiseman leads a 4-day field workshop, Reptiles and Amphibians of the Sierra Nevada, at the Sierra Nevada Field Campus for SF State University. 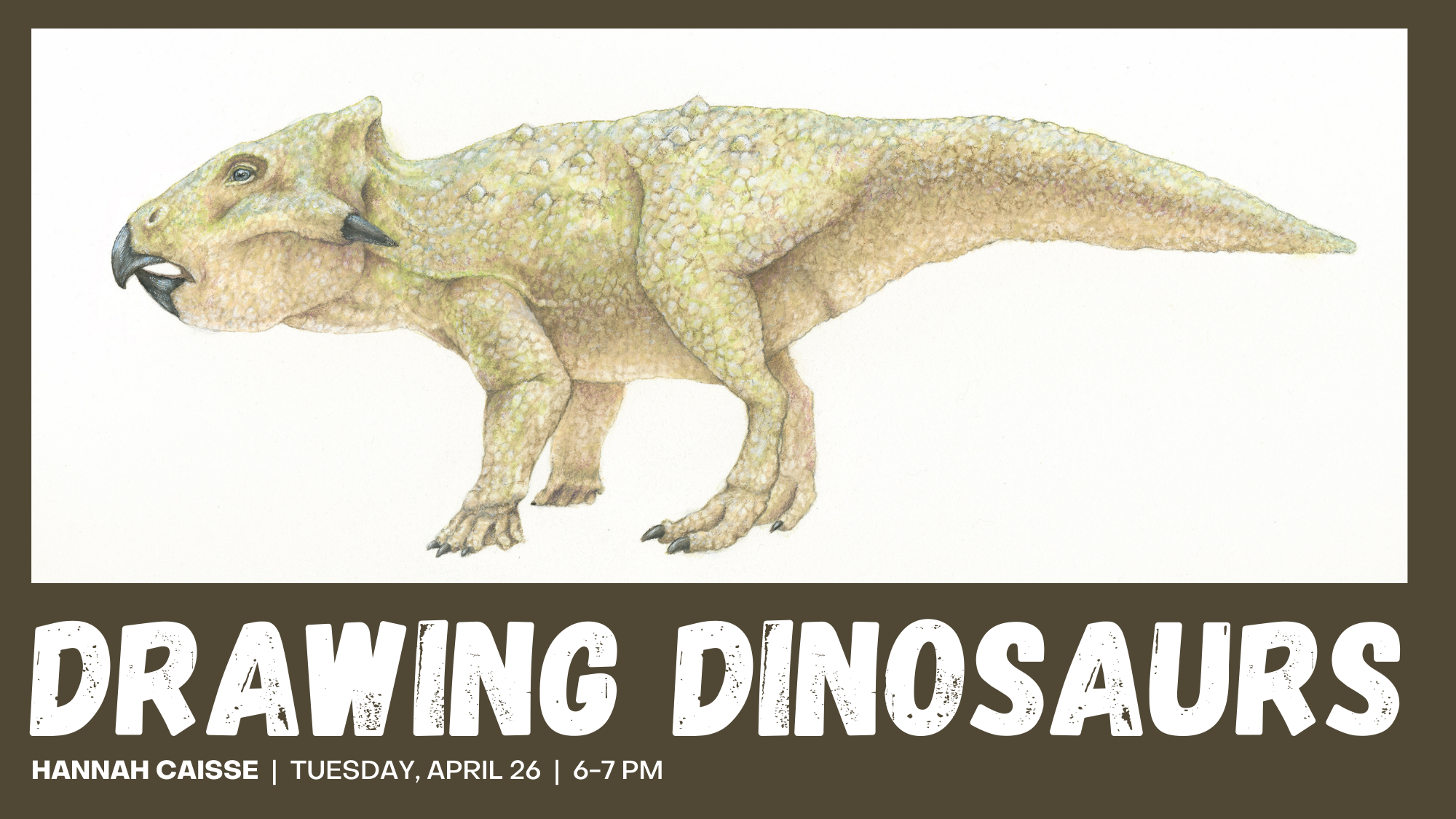 Think of your favorite dinosaur. Tyrannosaurus? Triceratops? Parasaurolophus? If you visualize it in your mind, you might be surprised to realize that you just thought of an illustration! Because we can’t time travel, science illustrators have to visually render extinct species by combining paleontology and art to make “paleoart.” During this online program, science illustrator Hannah Caisse will discuss the history of paleoart, demonstrate research and artistic processes, muse over hot topics in the paleontology field, and answer questions about art or dinosaurs. This program will be appropriate for young dinosaur lovers and paleoart fans in general.

When not working at a paleontology museum, dusting off fossils and enthusiastically teaching kids about the history of life, Hannah works to improve her techniques and skills in science illustration. She derives inspiration from native fauna, deep time, and even familiar backyard critters and plants. Infusing her drawings with her infectious admiration for the natural world, she always strives to cultivate wonder and engagement from her audience. 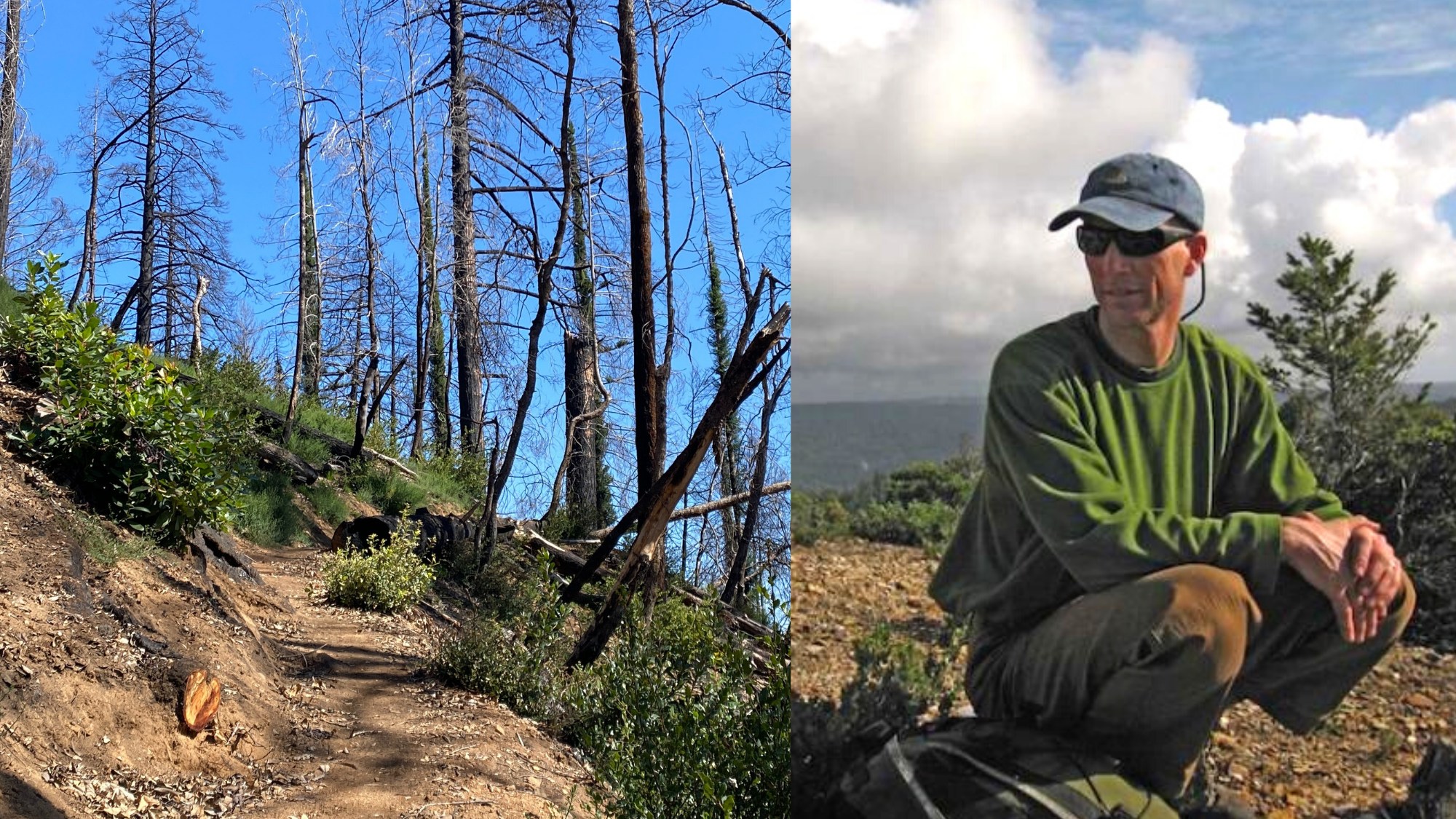 Fire is a critical aspect of California ecology. This talk from Tim Hyland, Natural Resource Program Manager for the Santa Cruz District of California State Parks, will discuss fire ecology in California in general, local native plant adaptations to fire, and the specific response of the Fall Creek Unit of Henry Cowell Redwoods State Park to the CZU Incident.

This program is part of our Fall Creek After Fire series in partnership with California State Parks and the Mountain Parks Foundation.

Tim Hyland is the Natural Resource Program Manager for the Santa Cruz District of California State Parks. Born in San Jose he has spent the last 27 years helping to protect the incredible biodiversity of the Santa Cruz Mountains found in our local State Parks. During that time he has assisted in and currently directs the prescribed fire program for the district. Helping to maintain various ecosystems by reintroducing fire to redwood forest, coastal prairie and rare sand hills chaparral. 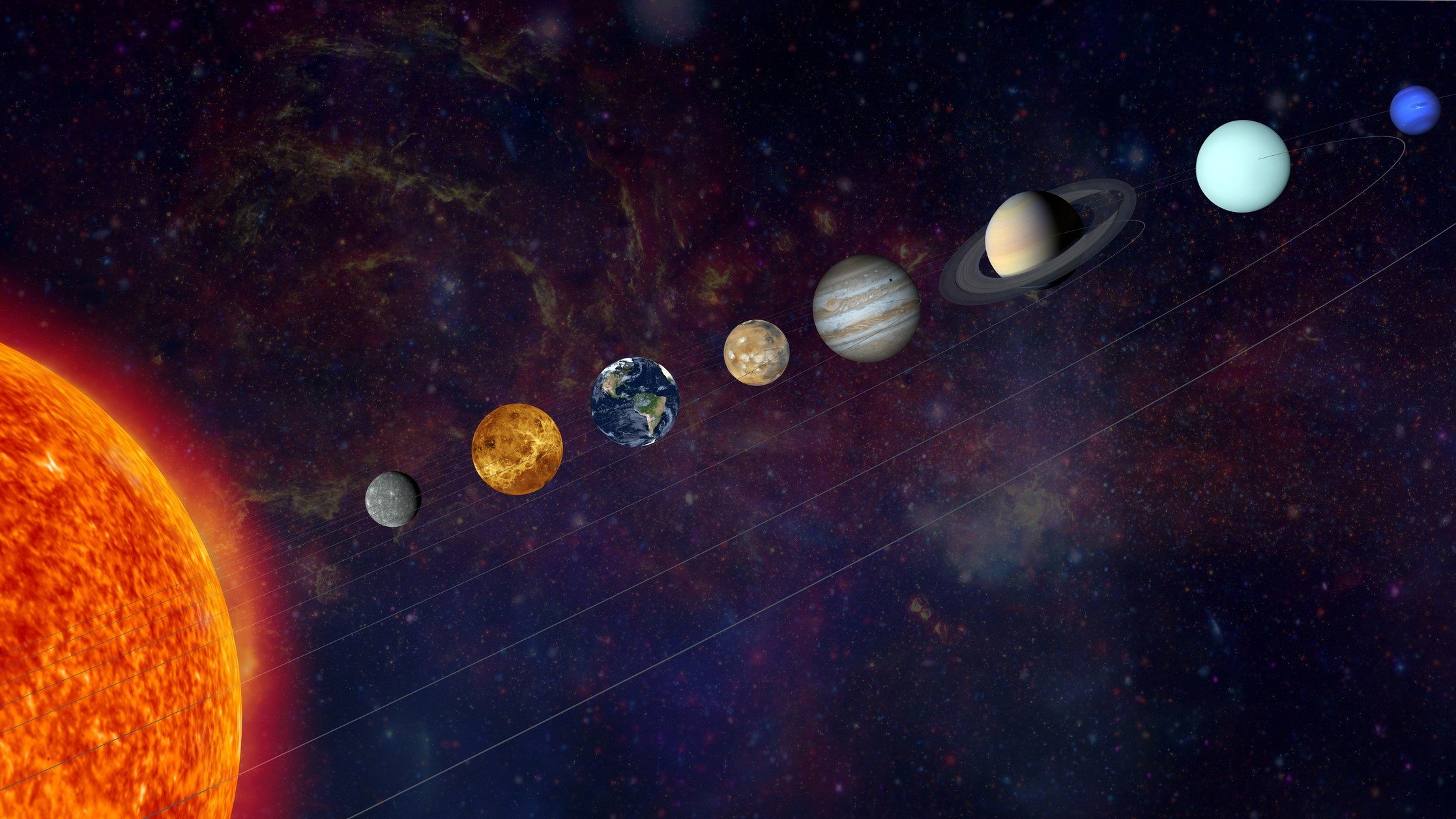 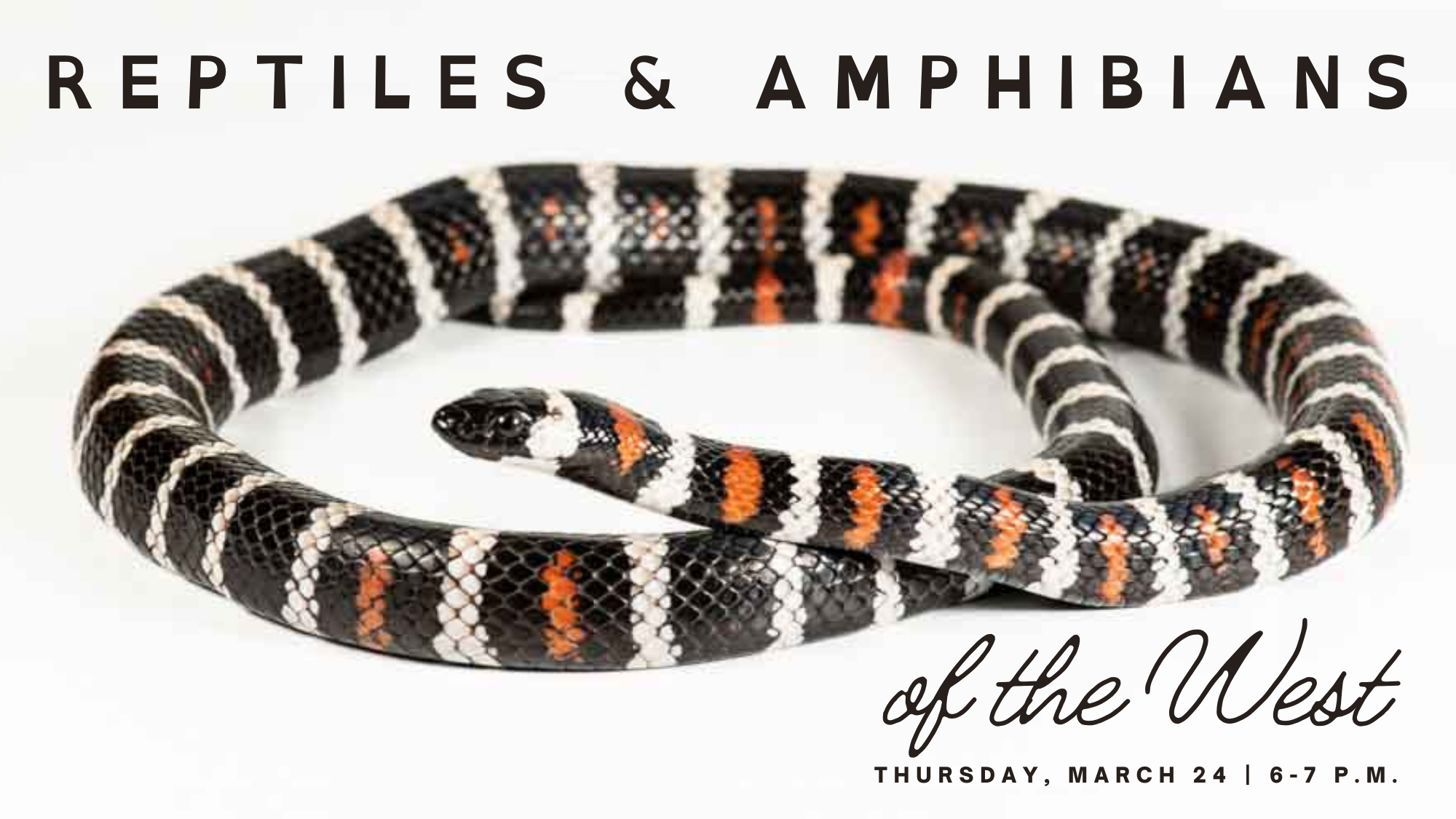 California is home to almost eighty species of “herps” — reptiles and amphibians. Get to know some of our common and uncommon neighbors, while digging into groundbreaking research about how lizards communicate (and explore the world) in wavelengths of color invisible to the human eye. From gila monsters to the common fence lizard of your backyard, the world of reptiles and amphibians will come alive during this presentation with Charles Hood, author of the new book Sea Turtles to Sidewinders and A Californian’s Guide to the Birds Among Us, and PhD candidates Jose Gabriel Martinez Fonseca (Northern Arizona University) and Erin Westeen (UC Berkeley).

Charles Hood is a Fulbright scholar, a former National Science Foundation Artist-in-Residence in Antarctica, and an author of Wild LA.

José Gabriel Martínez-Fonseca is a Nicaraguan biologist and wildlife photographer who has worked with amphibians and reptiles for over 12 years. He is currently a PhD student at Northern Arizona University.

Erin Westeen has done extensive fieldwork across western North America and the Neotropics and is currently a PhD candidate at UC Berkeley, where she studies spiny lizards.